Though it still seems like yesterday to many, this year we commemorate the 20th anniversary of 9/11 and the four deadly attacks that claimed the lives of 2996 Americans on September 11, 2001.

The first of four attacks killed everyone on board American Airlines Flight 11 as it crashed into the North Tower. Just 17 minutes later, hijackers crashed United Airlines Flight 175 into the South Tower, killing all on board that flight as well. In total, 2606 people in the World Trade Center lost their lives.

Almost 3000 people died in what many call the largest terrorist attack on U.S. soil, including 343 firefighters, 72 law enforcement officers, and 55 military personnel — and the powerful 9/11 quotes below help us remember the tragic day Americans will never forget.

Not only were both of the Twin Towers targeted, but a third plane, American Airlines Flight 77, hit the Pentagon a little under an hour later, killing 125. And fourth plane — United Airlines Flight 93 — crashed in a field in Pennsylvania, as crew and passengers struggled to wrestle control from the hijackers, again killing all on board.

RELATED: When The World Fell Apart On 9/11, I Made Cinnamon Rolls

While New York has healed in some ways since the tragedy, 9/11 has left a deep mark, not only on the city but also on the American ethos.

The day known as 9/11 or Patriot Day is meant to remember those who died in the attacks on September 11, 2001.

Here are 20 of the most powerful 9/11 quotes commemorating those we lost and inspiring us all as we continue moving forward.

1. "No day shall erase you from the memory of time." — Virgil's Aeneid, which adorns the 9/11 Memorial Museum 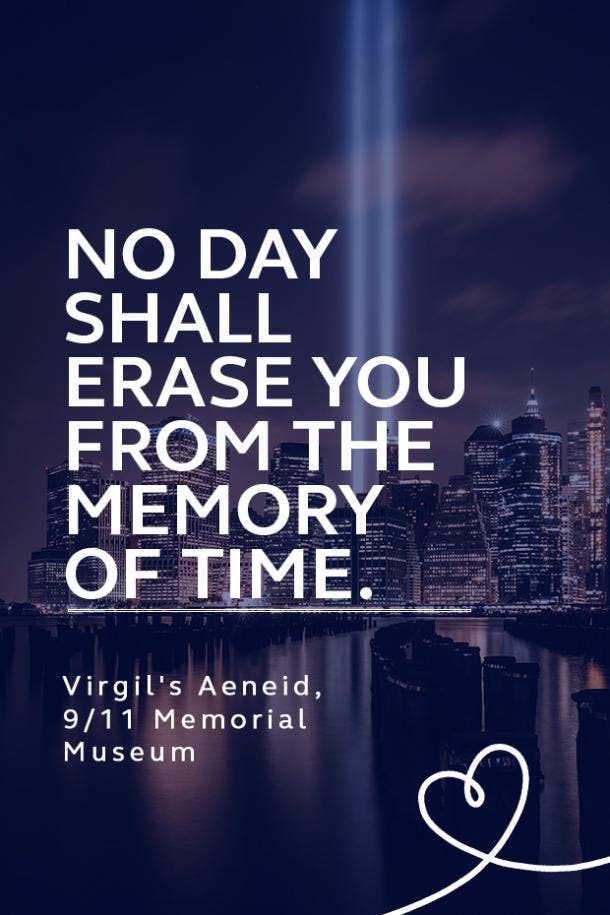 2. “If we learn nothing else from this tragedy, we learn that life is short and there is no time for hate.” — Sandy Dahl, wife of Flight 93 pilot Jason Dahl

3. “Even the smallest act of service, the simplest act of kindness, is a way to honor those we lost, a way to reclaim that spirit of unity that followed 9/11.” — Former President Barack Obama

4. “You can be sure that the American spirit will prevail over this tragedy.” — General Colin Powell

5. “For me and my family personally, September 11 was a reminder that life is fleeting, impermanent, and uncertain. Therefore, we must make use of every moment and nurture it with affection, tenderness, beauty, creativity, and laughter.” — Deepak Chopra 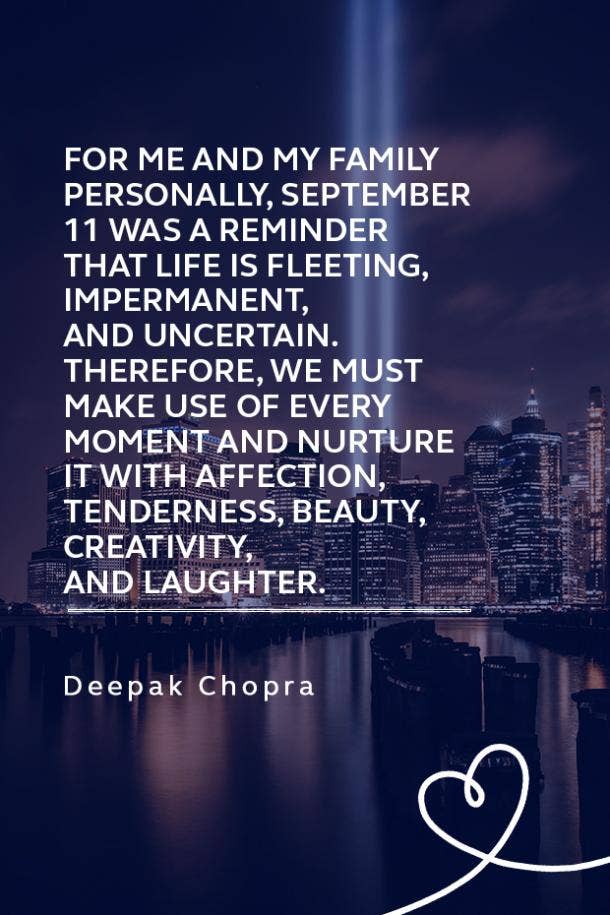 6. “True patriotism hates injustice in its own land more than anywhere else.” — Clarence Darrow

8. “September 11, 2001, revealed heroism in ordinary people who might have gone through their lives never called upon to demonstrate the extent of their courage.” — Geraldine Brooks

9. “We will win this struggle—not for glory, nor wealth, nor power, but for justice, for freedom, and for peace… so help us God.” — Tom Harkin 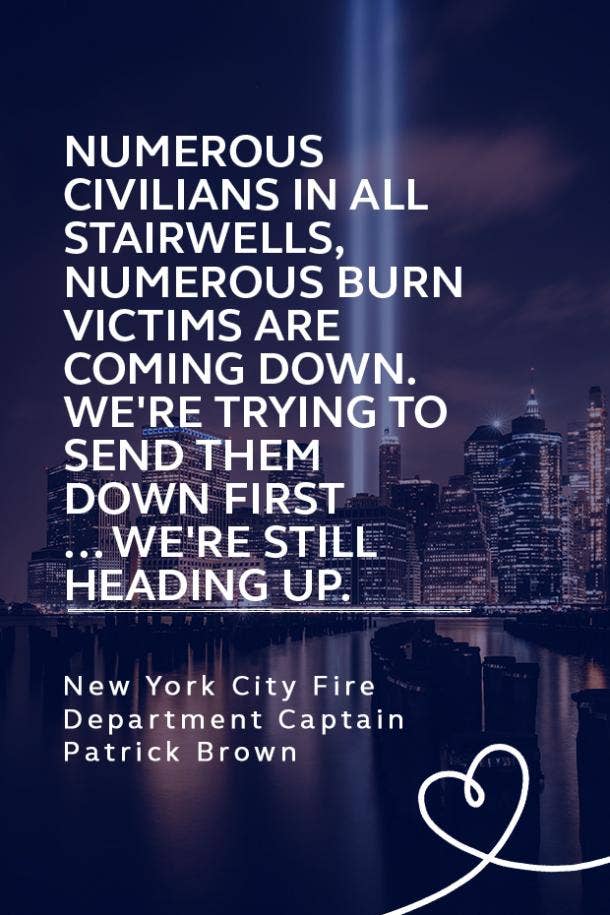 RELATED: Why Remembering Our Brother & What Happened On 9/11 Is A Tribute To The Very Best Of Mankind

11. "Why am I here? What is the reason I was saved? They're really unanswerable questions. After going through something like we did, all you can do is try to live your best life from day to day and move forward with gratitude." — Brian Clark, World Trade Center survivor

12. "September 11 is one of our worst days but it brought out the best in us. It unified us as a country and showed our charitable instincts and reminded us of what we stood for and stand for." — Senator Lamar Alexander

13. “It’s the nature of the world that most people have moved on, but the people directly involved with 9/11, for them, twice a day it’s 9/11.” — Robert Reeg, Former FDNY firefighter

14. “I was in New York on September 11 when those planes hit the World Trade Center. At the time, it seemed like it was a local thing. But three or four days later, by the time we drove across the country in the bus, we realized it wasn’t a local thing. You could really feel the states become united. We became the United States of America.” — John Madden 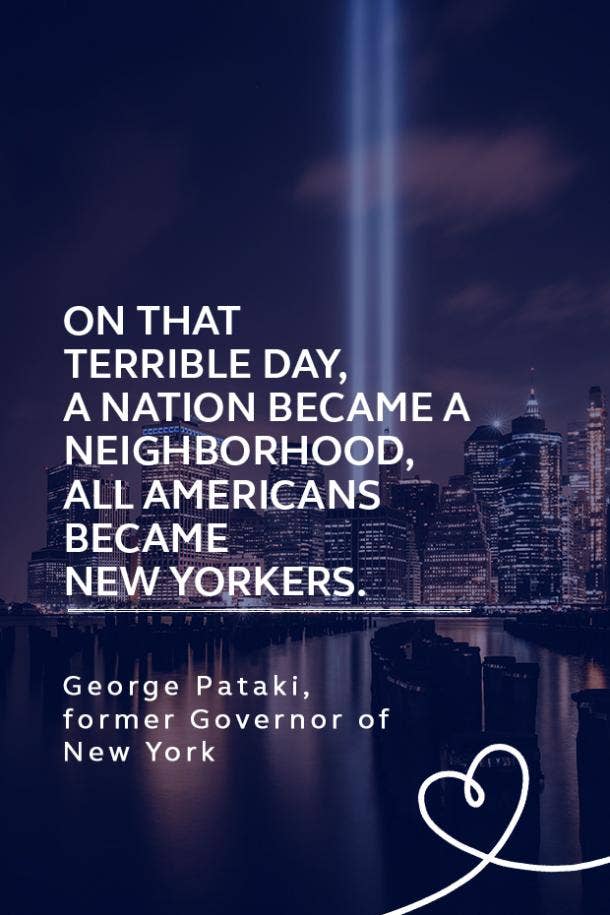 16. “America was not built on fear. America was built on courage, on imagination, and an unbeatable determination to do the job at hand.” — Former President Harry S. Truman

17. “My older brother John lived [his life] in Technicolor. … When he walked in the door, the whole house lit up. And I’m sure heaven lit up when he got there too.” — Anthoula Katsimatides

18. “All you can do is try to live your best life from day to day and move forward with gratitude.” — Brian Clark

19. “Where were you when the world stopped turning, on that September day?” — Alan Jackson

20. "One of the worst days in American history saw some of the bravest acts in American history. We'll always honor the heroes of 9/11. Here at this hallowed place, we pledge that we will never forget their sacrifice." — Former President George W. Bush 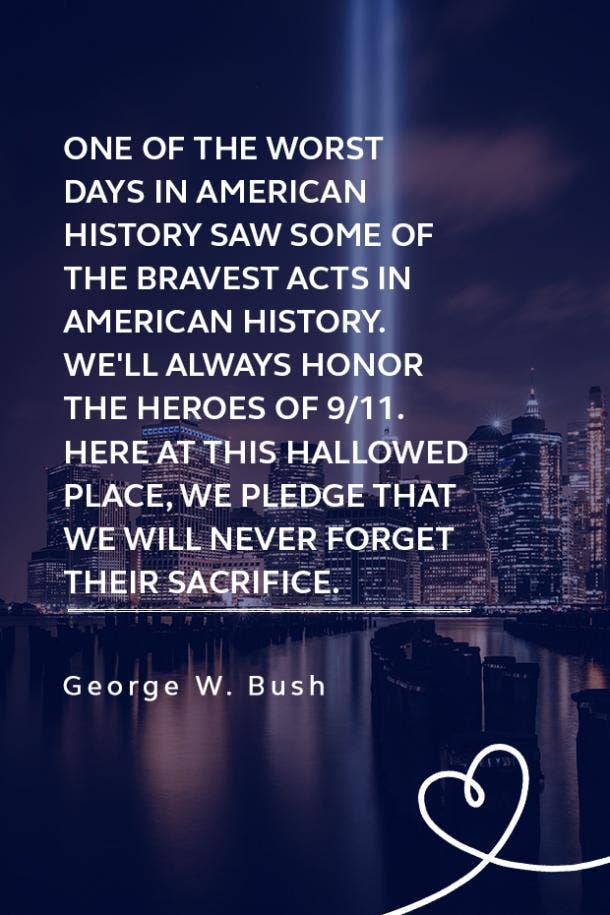 RELATED: How I Moved Forward After Being Blamed For The 9/11 Terrorist Attacks

Jessica Xing is a writer who covers books, media, and culture.

39 Neymar Quotes to Motivate You Throughout Your Day

19 Reassuring Quotes To Send To A Grieving Friend

23 Cheese Quotes About How Much You Love Cheese