I’ve been collecting the best boredom quotes for the last couple of years. And now, here are 67 of them just for you. The goal? To inspire you and make you realize that after all, boredom may not be so bad… Enjoy! 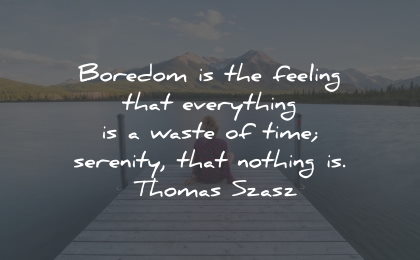 Boredom is the feeling that everything is a waste of time; serenity, that nothing is. Thomas Szasz Click to tweet 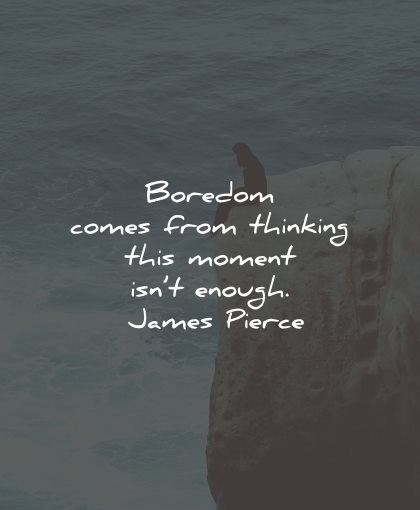 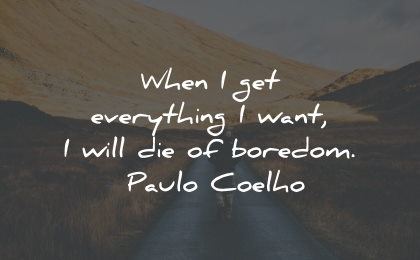 When I get everything I want, I will die of boredom. Paulo Coelho (twitter.com) Click to tweet 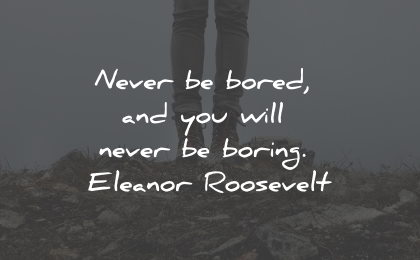 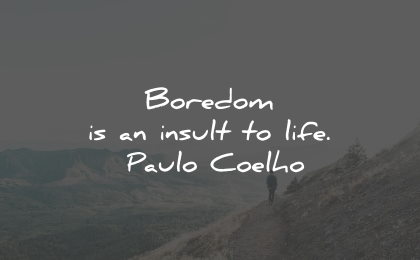 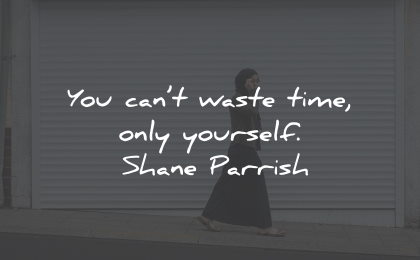 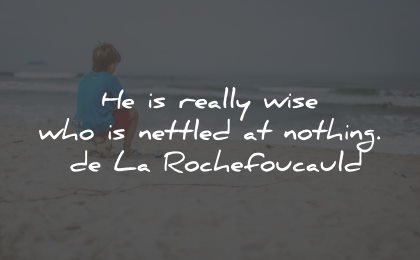 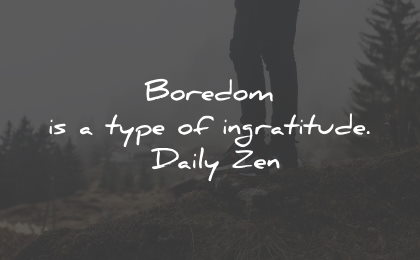 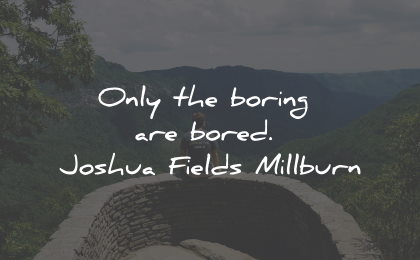 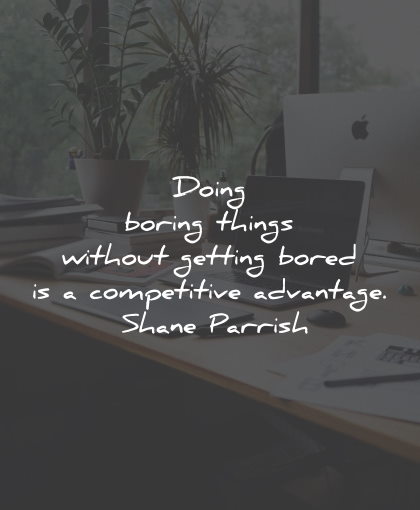 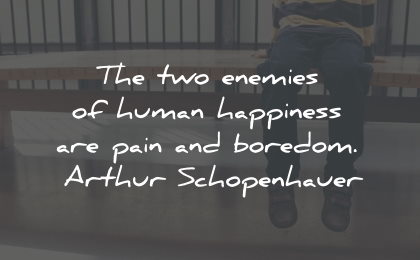 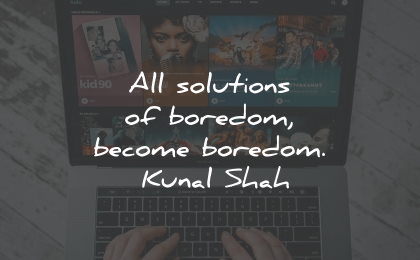 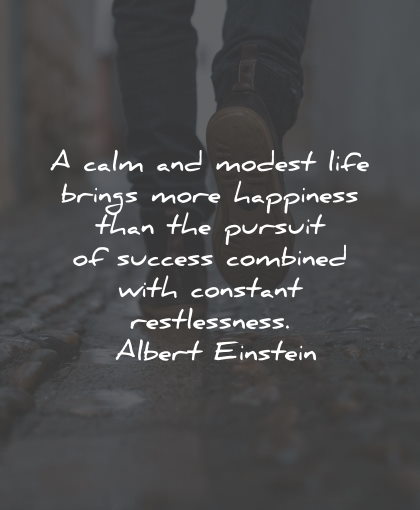 A calm and modest life brings more happiness than the pursuit of success combined with constant restlessness. Albert Einstein Click to tweet 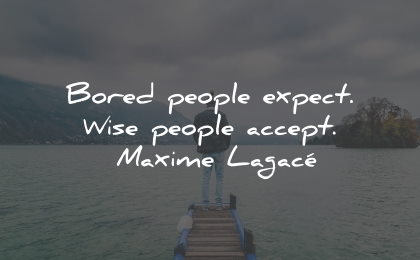 A few thoughts on boredom….

Most of us can’t deal with boredom.

Thus, we take our smartphones and get “busy”, scrolling infinitely and doing nothing important.

At least, this is what I observe on people around me, here in Canada.

our brain didn’t evolve to be connected 24/7 on news and drama.

Thus, we become stressed and overwhelmed.

In a sense, we forgot how to be bored, the right the way.

We forgot how it feels to think, to wander, to create or simply to do nothing.

We forgot how to slow down, how to feel, how to simply be and enjoy being, without anything else.

We learned how to be connected to our smartphones, but we forgot to stay connected with ourselves.

Do you feel the same way?

See also: How to Reconnect to Yourself (psychcentral.com) 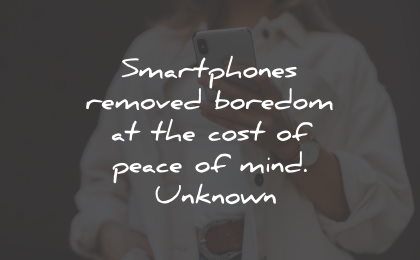 I would rather die of passion than of boredom. Vincent Van Gogh

Without lies humanity would perish of despair and boredom. Anatole France

We try and make every good experience repeatable, and then run away from the resulting boredom. Naval Ravikant (twitter.com)

The more you run from boredom, the more it follows you. James Pierce 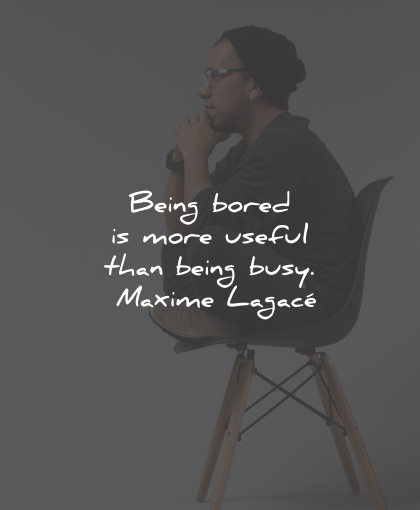 Normalize doing nothing and being fine with it. Maxime Lagacé

Order without diversity can result in monotony and boredom; diversity without order can produce chaos. Francis D.K. Ching

Do not get bored with the process. Erik Spoelstra

Boredom and insecurity may have brought you into the cave but you don’t have to stay. Thema Bryant-Davis

A generation that cannot endure boredom will be a generation of little men… of men in whom every vital impulse slowly withers, as though they were cut flowers in a vase. Bertrand Russell

Man finds nothing so intolerable as to be in a state of complete rest, without passions, without occupation, without diversion, without effort. Blaise Pascal 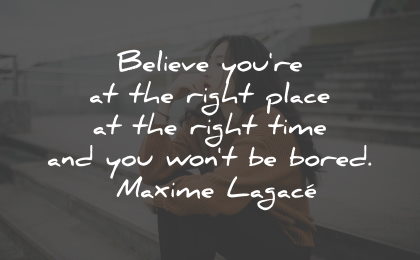 Boredom is a filter. Common ideas come before it. Uncommon ideas come after it. Sit with a project long enough to get bored with it, then sit a little more. The most useful insights bubble up after you get bored. James Clear (twitter.com)

Top performers in any craft figure out a way to fall in love with boredom, put in their reps, and do the work. James Clear

Boredom is the inevitable consequence of a life devoted to pleasure. Kapil Gupta (twitter.com)

I begin with the principle that all men are bores. Surely no one will prove himself so great a bore as to contradict me in this. Søren Kierkegaard

Boredom leads to one of these two things: more boredom or more creativity. Matthew Kobach

You waste years by not being able to waste hours. Amos Tversky

Doing drugs is just a war with boredom. Mac Miller 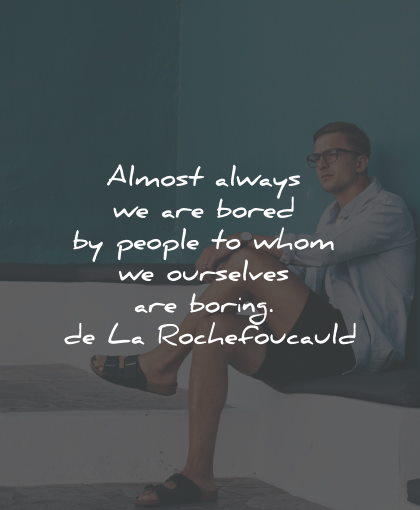 Almost always we are bored by people to whom we ourselves are boring. François de La Rochefoucauld

We often boast that we are never bored, but yet we are so conceited that we do not perceive how often we bore others. François de La Rochefoucauld Click to tweet

Boredom is a defense mechanism to avoid having to sit alone with our unaddressed thoughts. Naval Ravikant (twitter.com)

I don’t know anything, but I do know that everything is interesting if you go into it deeply enough. Richard Feynman

Boredom is a privilege. Cherish it while it lasts instead of trying to fix it. Preethi Kasireddy (twitter.com) 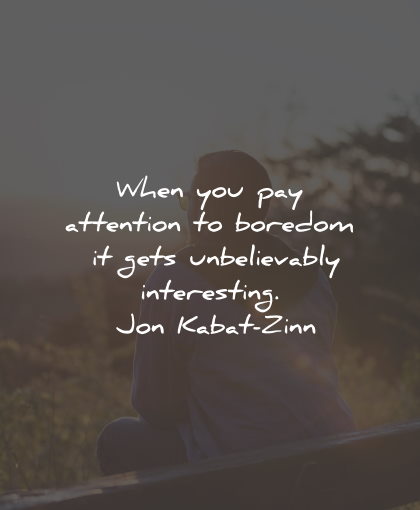 You are not bored, you are boring. Brian Norgard

Boredom is a privilege. Instead of finding ways to entertain yourself, embrace the boredom. Your mind is finally free. Preethi Kasireddy (twitter.com)

Meditation is intermittent fasting for the mind. Too much sugar leads to a heavy body, and too many distractions lead to a heavy mind. Time spent undistracted and alone, in self-examination, journaling, meditation, resolves the unresolved and takes us from mentally fat to fit. Naval Ravikant (twitter.com)

Dullness doesn’t sell ads, so the media manufactures a continuous stream of outrage to fill the void. Elaine Ou

The phone gives us a lot but it takes away three key elements of discovery: loneliness, uncertainty, and boredom. Those have always been where creative ideas come from. Lynda Barry

You’ll do better work if you’re bored rather than busy. Naval Ravikant (twitter.com)

There is no observable difference between peace and boredom – only your mindset. Angela Jiang 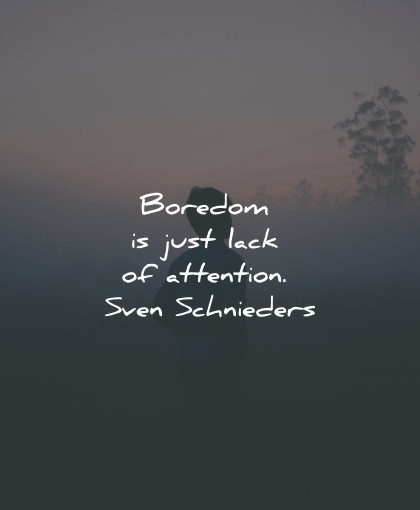 Human life must be some kind of mistake. The truth of this will be sufficiently obvious if we only remember that man is a compound of needs and necessities hard to satisfy; and that even when they are satisfied, all he obtains is a state of painlessness, where nothing remains to him but abandonment to boredom. Arthur Schopenhauer

Life swings like a pendulum backward and forward between pain and boredom. Arthur Schopenhauer

Boredom ought to be one of the seven deadly sins. It deserves the honor. Frederick Buechner

Loneliness is cured by contact with yourself. Sven Schnieders

Do you know that in a universe so full of wonders they have managed to invent boredom. Terry Pratchett

Against boredom even gods struggle in vain. Friedrich Nietzsche 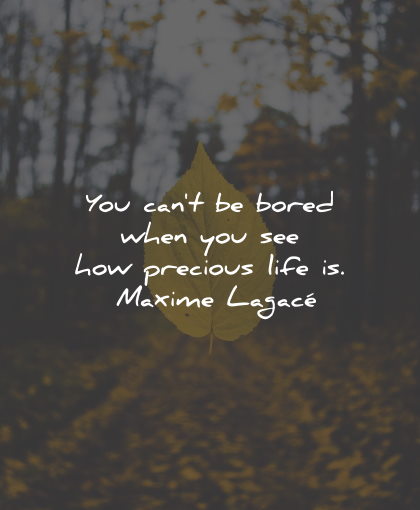 Monotony has nothing to do with a place; monotony, either in its sensation or its infliction, is simply the quality of a person. There are no dreary sights; there are only dreary sight seers. G.K. Chesterton (Alarms and Discursions, Amazon book)

It is fatal to know too much at the outset. Boredom comes as quickly to the traveler who knows his route as the novelist who is over certain of his plot. Paul Theroux

I know enough of the world now to have almost lost the capacity of being much surprised by anything. Charles Dickens

I feel monotony and death to be almost the same. Charlotte Bronte

Greatness is consistency. Meditating once is common. Meditating daily is rare. Exercising today is simple. Training every week is simply remarkable. Writing one essay doesn’t mean much. Writing every day practically makes you a hero. Unheroic days can make for heroic decades. James Clear (twitter.com)

The greatest threat to success is not failure, but boredom. James Clear (twitter.com) 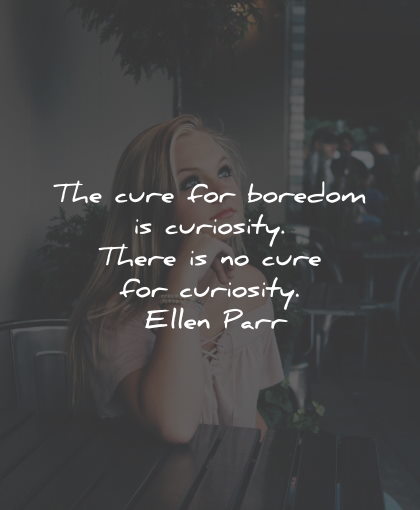 The cure for boredom is curiosity. There is no cure for curiosity. Ellen Parr Click to tweet

Call to action: Read How to Fall in Love With Boredom and Unlock Your Mental Toughness (jamesclear.com)
or 5 Benefits of Boredom (psychologytoday.com)
or The Art of Being Bored: How to Be More Productive By Doing Nothing (zapier.com)

Hope you enjoyed these surprising boredom quotes. Hope you also discoved that boredom can, in fact, be beneficial to your mental health, productivity and creativity. Now, if you liked the quotes, please share them with a bored friend today!