57 Best Grinch Quotes From ‘How The Grinch Stole Christmas’

It's Christmas time and there's one story we can all relate to at least once during this commercialized season — the beloved children's story, "How The Grinch Stole Christmas" by Dr. Seuss.

The tale is one we all know and adore. It follows the Grinch, a lonely creature who tries to stop Christmas by stealing all the gifts and decorations from nearby Whoville on Christmas Eve. With the help of a 6-year-old girl named Cindy Lou Who, the Grinch soon learns the true meaning of Christmas, teaching us all the same thing along the way, so much so that citing Grinch quotes has become pretty much a standard part of the Christmas season, whether you love it or hate it.

The Grinch made his first appearance in a 33-line poem titled "The Hoobub and the Grinch" in the May 1955 edition of Redbook Magazine. Theodore Geisel (Dr. Seuss) has said the infamously grumpy character was inspired by his own frustrations with the commercialization of Christmas.

The full story was published in 1957, and has been re-imagined throughout the years in multiple adaptations. The most famous of these are arguably the 1966 made-for-TV animated film "Dr. Seuss' How the Grinch Stole Christmas" narrated by Boris Karloff, the 2018 computer-animated movie simply titled "The Grinch" starring Benedict Cumberbatch in the title role, and the iconic 2000 live-action feature film starring Jim Carrey.

(Fun fact: the original Grinch wasn't green. He was black and white with pink eyes in the original illustrated book.)

RELATED: 27 ‘I Hate Christmas’ Quotes For Everyone Who’s Feeling Like The Grinch

No matter which version of the Grinch's story is your own personal favorite, the list of Grinch quotes below are sure to get you feeling the Christmas spirit.

57 Best Grinch Quotes from "How The Grinch Stole Christmas" 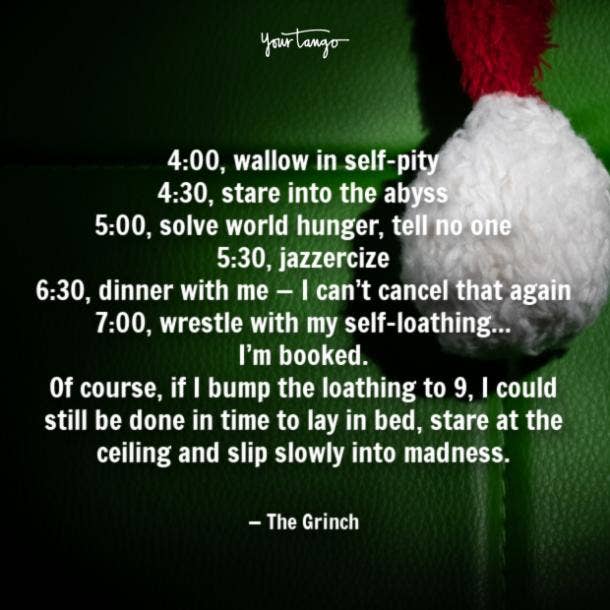 3. "Kids today. So desensitized by movies and television." — The Grinch

5. "All right, you're a reindeer. Here's your motivation: Your name is Rudolph, you're a freak with a red nose, and no one likes you. Then, one day, Santa picks you and you save Christmas." — The Grinch

7. "Look at those greedy little gift monsters." — The Grinch

8. "This is the loudest snow I've ever heard in my life!" — The Grinch

9. "Well, Santa had eight reindeer, he looks like he ate the other seven." — The Grinch

10. "And they’ll feast, feast, feast, feast. They’ll eat their Who-Pudding and rare Who-Roast Beast. But that’s something I just cannot stand in the least. Oh, no. I’m speaking in rhyme!" — The Grinch

12. "He puzzled and puzzled 'till his puzzler was sore." — The Narrator 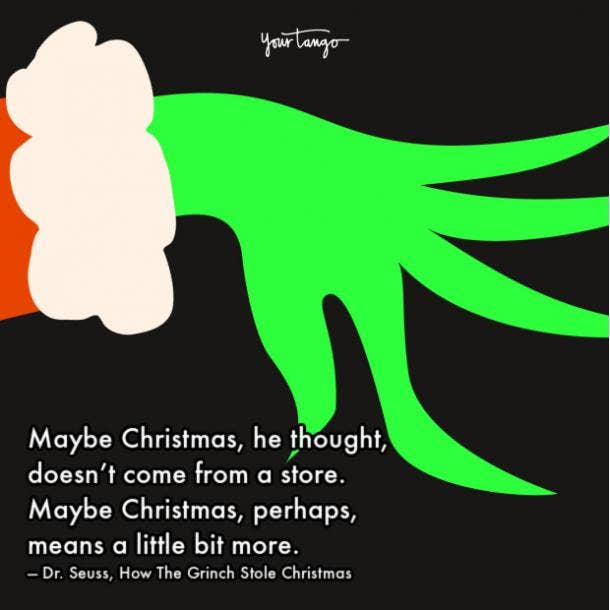 17. "It was me. I stole your Christmas. I stole it because I thought it would fix something from the past. But it didn't." — The Grinch

18. "I know just what to do. I become Santa Claus to steal their Christmas. If he could deliver it one night, then I can steal it. What's Santa have that I don't?" — The Grinch

20. "The avarice never ends! I want golf clubs. I want diamonds. I want a pony so I can ride it twice, get bored and sell it to make glue." — The Grinch

RELATED: The Best Funny Christmas Quotes And Memes To Brighten Any Grinch's Holiday

21. "Blast this Christmas music. It’s joyful and triumphant." — The Grinch 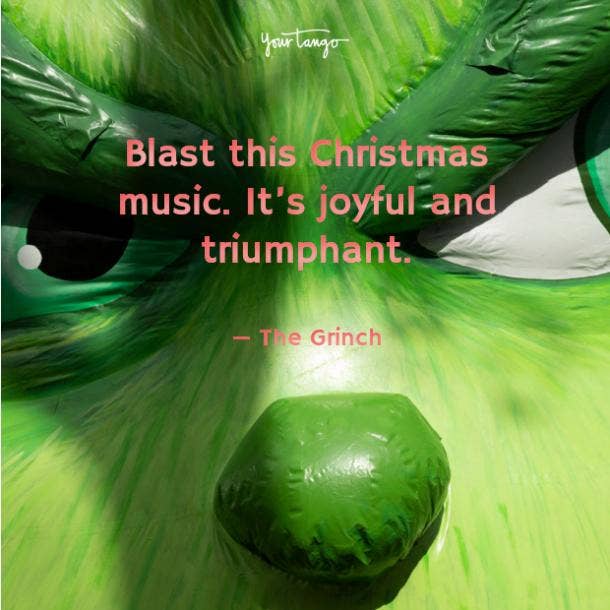 27. "I specifically bought enough food to last me until January. How much emotional eating have I been doing?" — The Grinch

29. "I tell you Max, I don't know why I ever leave this place. I've got all the company I need right here." — The Grinch

31. "I guess I could use a little social interaction." — The Grinch

32. “Stupid. Ugly. Out of date. This is ridiculous. If I can’t find something nice to wear I’m not going.” — The Grinch

33. "Christmas Day will always be just as long as we have we." — The Narrator 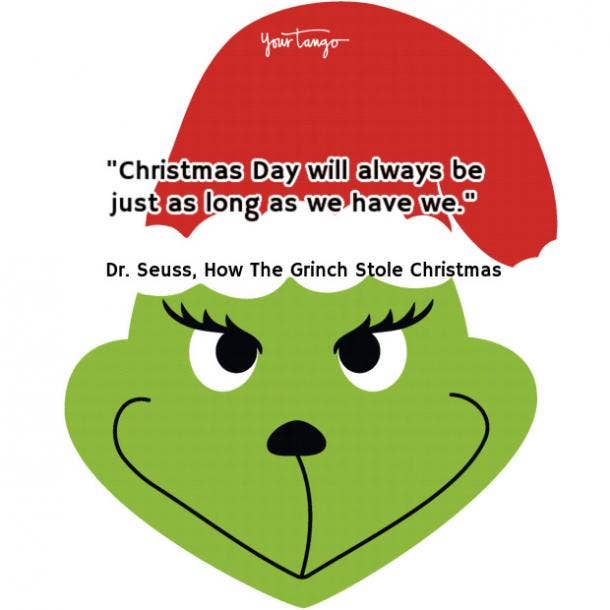 34. "Now you listen to me, young lady! Even if we’re horribly mangled, there’ll be no sad faces on Christmas." — The Grinch

36. “I don’t need anything more for Christmas than this right here. My family.” — Lou Lou Who

37. "You can't hurt Christmas, Mr. Mayor, because it isn't about... the gifts or the contest or the fancy lights. That's what Cindy's been trying to tell everyone..." — Lou Lou Who

38. "No matter how different a Who may appear, he will always be welcome with holiday cheer." — Cindy Lou Who

40. "Your daughter's kindness changed my life." — The Grinch

44. "Santa, don't forget the Grinch. I know he's mean and hairy and smelly, and his hands are cold and clammy, but I think he's kinda... sweet." — Cindy Lou Who

45. “Welcome Christmas while we stand Heart to heart and hand in hand.” — The Whos

RELATED: 45 Most Romantic Christmas Love Songs Of All Time

47. “Welcome Christmas. Bring your cheer. Cheer to all Whos, far and near.” — The Whos 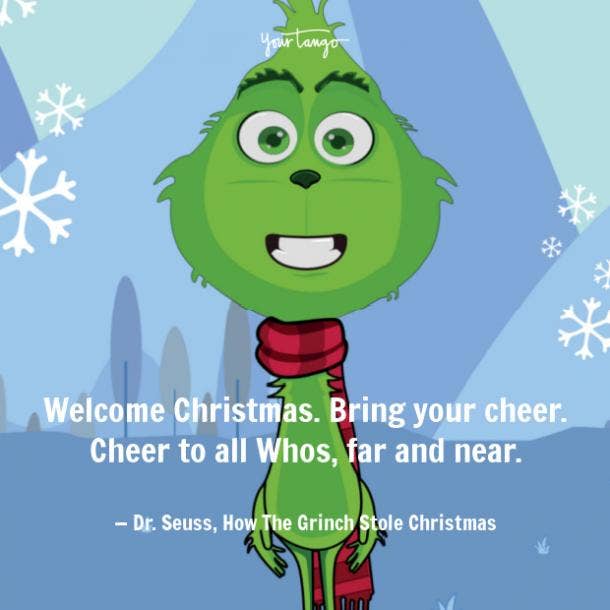 48. “The Whos down in Whoville liked Christmas a lot. But the Grinch who lived just North of Whoville did not!” — The Narrator

49. "The Grinch hated Christmas! The whole Christmas season! Now, please don’t ask why. No one quite knows the reason. It could be his head wasn’t screwed on just right. It could be, perhaps his shoes were too tight. But I think that the most likely reason of all, May have been that his heart was two sizes too small." — The Narrator

51. “He brought everything back, all the food for the feast! And he, he himself, the Grinch carved the roast beast!” — The Narrator

52. “Then he slid down the chimney, a rather tight pinch. But if Santa could do it, then so could the Grinch.” — The Narrator

53. “And he did a sound rising over the snow. It started in low. Then it started to grow. But this sound wasn’t sad! Why, this sound sounded glad!” — The Narrator

55. “Every Who down in Whoville, the tall and the small, Was singing without any presents at all! He HADN'T stopped Christmas from coming! IT CAME! Somehow or other, it came just the same!” — The Narrator

57. “And what happened then? Well, in Whoville they say that the Grinch’s small heart grew three sizes that day!” — The Narrator

Deauna Nunes is an assistant editor who covers pop culture, lifestyle, love and relationships for YourTango. She's been published by Emerson College's literary magazine Generic. Follow her on Twitter and on Instagram.