51 Best Ellen DeGeneres Quotes That Will Make You Laugh & Cry

You'd have to have been living under many a rock not to know Ellen DeGeneres, the comedian, actress, writer, and television host who turns 63 on January 26. But you may not the long road she took to her eventually iconic level of success.

Ellen started performing in small clubs, and in 1981 she became the emcee at Clyde’s Comedy Club. Around that time, she began to go on tours all over the nation, and in 1984, Showtime declared her The Funniest Person In America.

In 1986, Ellen appeared on "The Tonight Show Starring Johnny Carson". After she performed that set, Carson motioned for her to join him for an on-air interview, which was the first time a female comedian was invited to partake in that. Even though Ellen stopped performing stand-up in 2003, she made her comeback after 15 years by releasing a special to Netflix called "Relatable".

Ellen's television career kicked off with her first regular TV role in 1989 on a sitcom called "Open House." She also had parts in shows like "One Night Stand" and "Laurie Hill."

In 1994, DeGeneres starred in the show "These Friends of Mine: and after just one season they changed the name of the show to "Ellen."

In 1997, she famously came out as a lesbian on "The Oprah Winfrey Show" and soon after her character on "Ellen" also came out, making "Ellen" the first show on prime-time to include an openly gay leading character. The show was canceled shortly after in 1998, after which DeGeneres began her own talk show, "The Ellen DeGeneres Show," in 2003.

"The Ellen DeGeneres Show" was incredibly successful, receiving over 20 Daytime Emmy Awards in the first five seasons. Now after 19 seasons and not a little bit of controversy, the show will be coming to an end in the Spring of 2022.

In 2008, Ellen DeGeneres married actress Portia de Rossi, and in 2009, served as a judge on "American Idol" — but DeGeneres decided to leave the show after just one season because she didn’t enjoy judging the contestants.

She then explored interior design with her show "Ellen’s Design Challenge" in 2015. And 2017, she hosted "Ellen’s Game of Games" which featured weird competitions among her audience members.

Along with her television work, Ellen DeGeneres is famous for voice acting the role of Dory in the animated film "Finding Nemo" in 2003 and reprised the role in 2016's "Finding Dory." DeGeneres also wrote best-selling books like "My Point...and I Do Have One," "The Funny Thing Is...," and "Seriously...I’m Kidding."

In 2020, she received the Carol Burnett Award at the Golden Globe Awards.

To help you channel what many still find to be Ellen's positive and motivating energy, take a look below at some of the best Ellen DeGeneres quotes about life to help you learn compassion and connect to the people around you.

51 Best Ellen DeGeneres Quotes To Make You Laugh and Cry

1. "It’s our challenges and obstacles that give us layers of depth and make us interesting. Are they fun when they happen? No. But they are what make us unique." 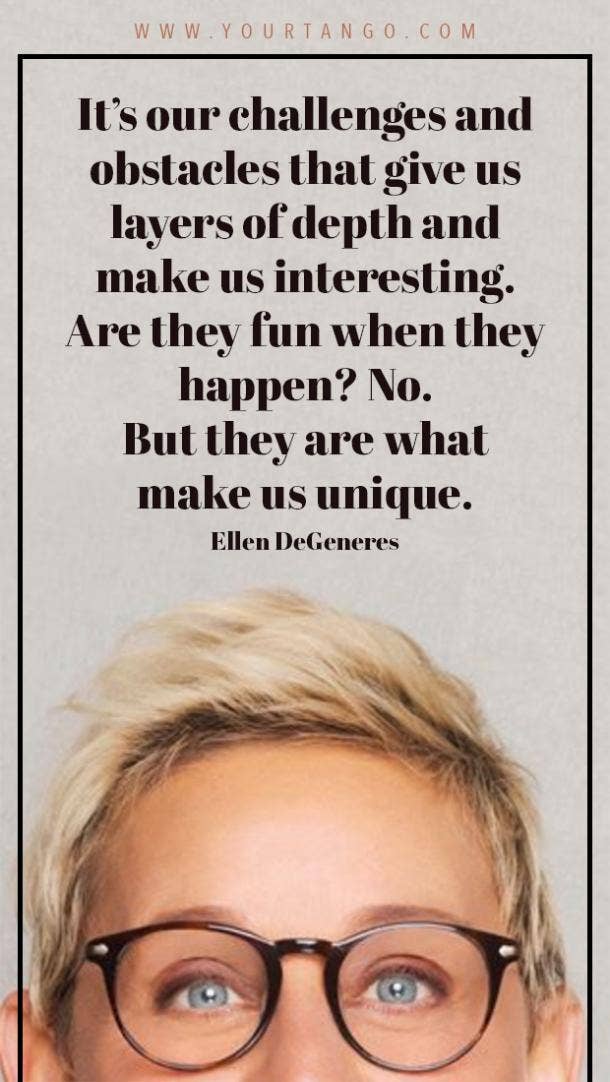 3. "If we’re destroying our trees and destroying our environment and hurting animals and hurting one another and all that stuff, there’s got to be a very powerful energy to fight that. I think we need more love in the world. We need more kindness, more compassion, more joy, more laughter. I definitely want to contribute to that."

4. "We’re all supposed to be different. I want so badly to encourage everyone to say, 'Who am I and how do I want to live my life?'"

5. "I learned compassion from being discriminated against. Everything bad that’s ever happened to me has taught me compassion."

6. "I stand for honesty, equality, kindness, compassion, treating people the way you want to be treated, and helping those in need. To me, those are traditional values."

7. "I work really hard at trying to see the big picture and not getting stuck in ego."

8. "Most comedy is based on getting a laugh at somebody else’s expense. And I find that that’s just a form of bullying in a major way. So I want to be an example that you can be funny and be kind, and make people laugh without hurting somebody else’s feelings."

9. "Follow your passion. Stay true to yourself. Never follow someone else’s path unless you’re in the woods and you’re lost and you see a path. By all means, you should follow that."

10. "Find out who you are and be that person. That’s what your soul was put on this Earth to be. Find that truth, live that truth, and everything else will come." 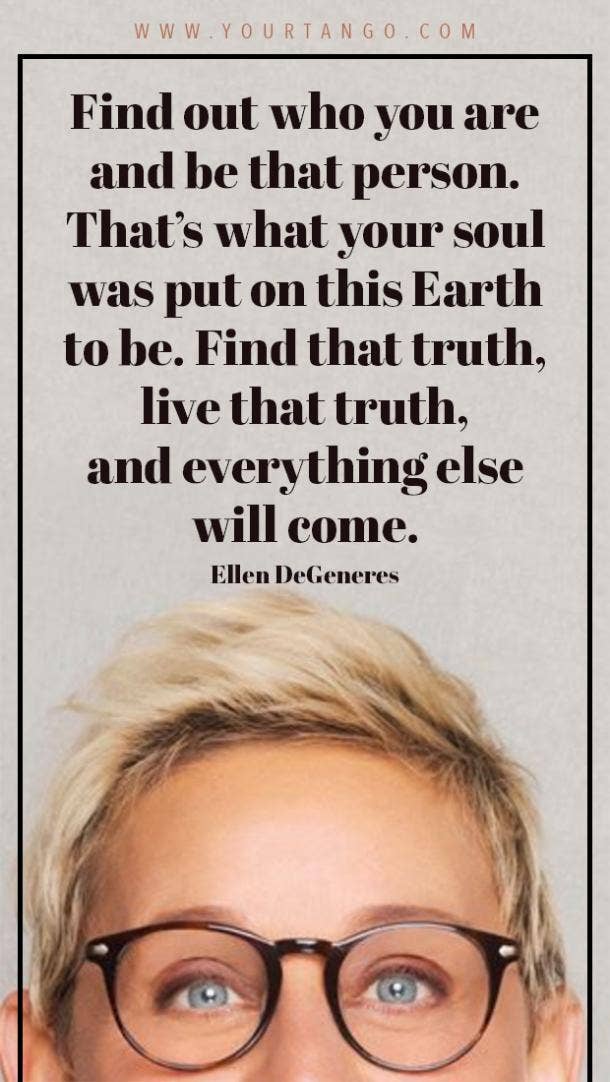 12. "Though you feel like you're not where you’re supposed to be, you shouldn’t worry because the next turn you take, it will lead you to where you wanna go."

13. "Life is like one big Mardi Gras. But instead of showing boobs, show people your brain, and if they like what they see, you’ll have more beads than you know what to do with."

14. "Do things that make you happy within the confines of the legal system."

15. "Don’t worry about what people say about you. Let the naysayers nay. They will eventually grow tired of naying."

16. "I’m a comedian, and I definitely see the humor in a lot of things. I am also sad a lot. I cry often and easily. I think you’re supposed to feel all kinds of things."

17. "I think beauty comes from actually knowing who you are. That’s real beauty to me."

18. "It is failure that gives you the proper perspective on success."

19. "Do we have to know who’s gay and who’s straight? Can’t we just love everybody and judge them by the car they drive?"

20.& "Be open to learning new lessons, even if they contradict the lessons you learned yesterday." 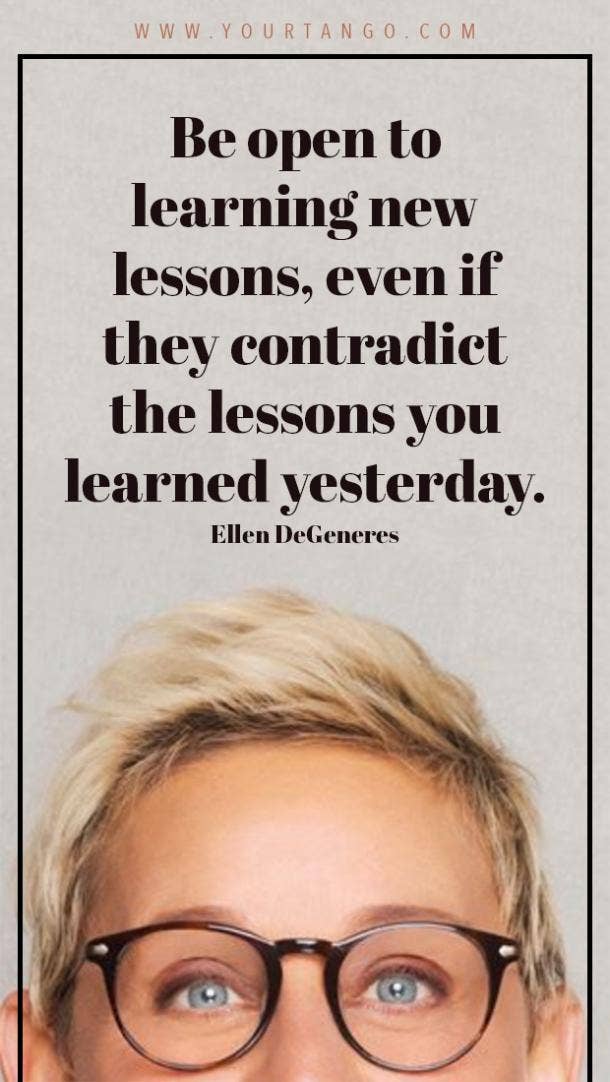 RELATED: Get Ready To Feel Old: Here’s What These Girls From Ellen Look Like Now

21. "I don’t know what people are scared of. Maybe they think their children will be influenced, but I’ve got to tell you, I was raised by two heterosexuals. Everywhere I looked — heterosexuals. And they did not influence me. It’s time we love people for who they are and let them love who they want."

25. “I really don’t think I need buns of steel. I’d be happy with buns of cinnamon.”

26. “The only thing that scares me more than space aliens is the idea that there aren’t any space aliens. We can’t be the best that creation has to offer. I pray we’re not all there is. If so, we’re in big trouble.”

27. “When I go hiking and I get over the hill, That means I am past the hard part and there is a snack in my future. That’s a good thing as far as I am concerned.”

28. “But seriously, I think overall in the scheme of things winning an Emmy is not important. Let’s get our priorities straight. I think we all know what’s really important in life? winning an Oscar.”

29. "Accept who you are unless you’re a serial killer.” 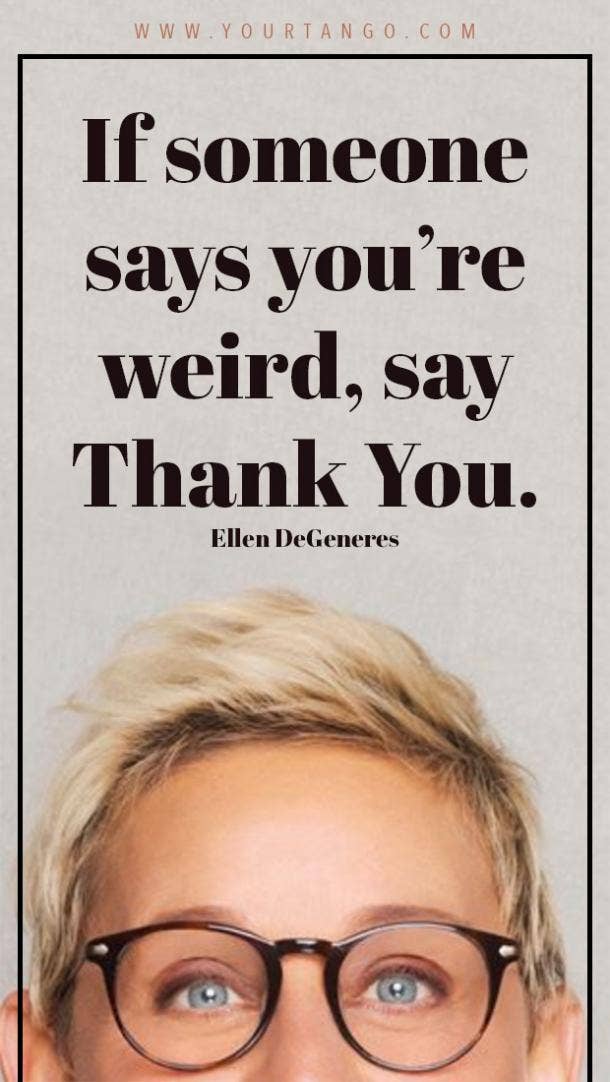 31. “Life is short. If you doubt me, ask a butterfly. Their average life span is a mere five to fourteen days.”

33. “I see those picketers, and I think you know, if I weren’t a loving, non-violent, spiritual person, I would really go over there and grab those signs and smash them over their heads and shove them up their asses. But…I’m a loving, spiritual person.”

34. “You are never too old to play. You are only too old for low-rise jeans.”

36. “Never follow anyone else’s path, unless you’re in the woods and you’re lost and you see a path. Then, by all means, follow that path.”

37. “I don’t understand the sizes anymore. There’s a size zero, which I didn’t even know that they had. It must stand for: “Ohhh my God, you’re thin.”

38. “I’m on the patch right now. Where it releases small dosages of approval until I no longer crave it, and then I’m gonna rip it off.”

39. “Normal is getting dressed in clothes that you buy for work and driving through traffic in a car that you are still paying for – in order to get to the job you need to pay for the clothes and the car, and the house you leave vacant all day so you can afford to live in it.”

40.& “It always helps to think about other people instead of ourselves.” 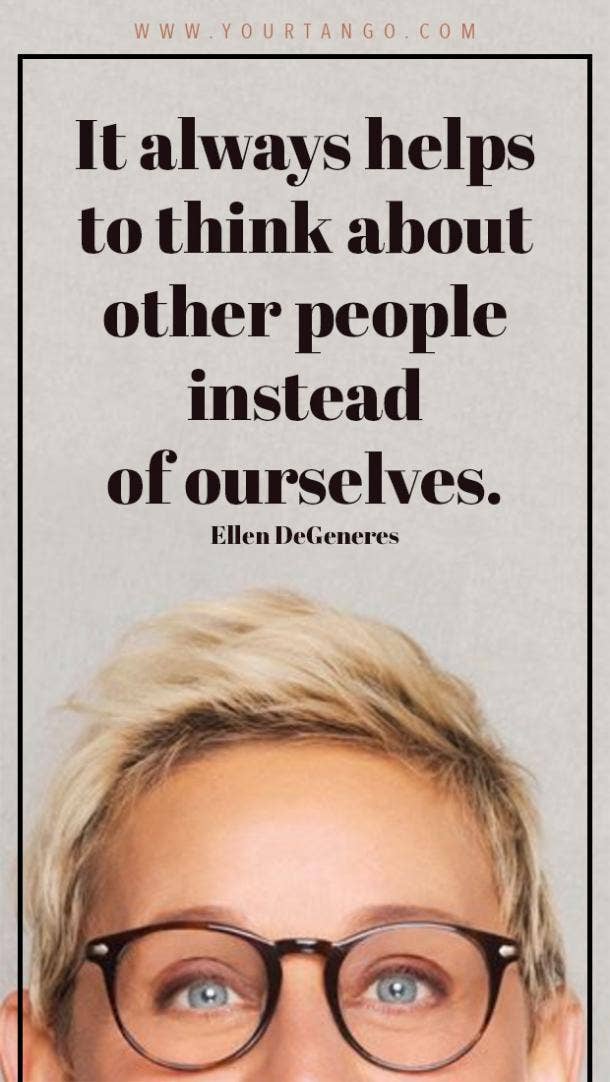 41. “Laugh as much as you can. Laugh until you cry. Cry until you laugh. Keep doing it even if people are passing you on the street saying, ‘I can’t tell if that person is laughing or crying, but either way they seem crazy, let’s walk faster.’ Emote. It’s okay. It shows you are thinking and feeling.”

42. “While I was doing stand-up, I thought I knew for sure that success meant getting everyone to like me. So I became whoever I thought people wanted me to be. I’d say yes when I wanted to say no, and I even wore a few dresses.”

43. “The most important thing in your life is to live your life with integrity and not to give in to peer pressure to try to be something that you’re not, to live your life as an honest and compassionate person, to contribute in some way.”

45. “I did it selfishly because I didn’t want to live in pain anymore. It’s funny, when you do something from a place of truth, it works out where it is the right thing for a lot of other people as well.”

46. “When you connect with that love and that compassion, that’s when everything unfolds.”

48. “Gratitude is looking on the brighter side of the life, even if it means hurting your eyes.”

49. “The thing everyone should realize is that the key to happiness is being happy by yourself and for yourself.” 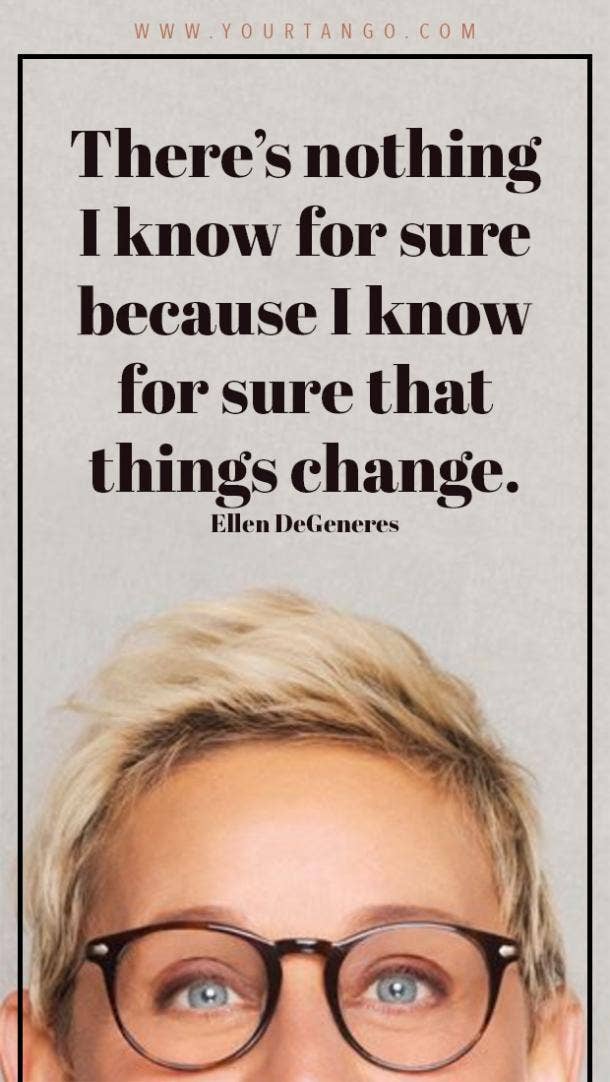 51. “There should be no discrimination against languages people speak, skin color, or religion.”

RELATED: Which Ex-Girlfriend Of Brad Pitt's Did Ellen Date?

Jaycee Levin is a writer who covers pop culture, astrology, and relationships.

51 Best Ellen DeGeneres Quotes That Will Make You Laugh & Cry