You'd be hard pressed to find something not to love about Winnie the Pooh.

The fictional teddy bear was first introduced to us by A.A. Milne as Edward Bear in 1924's "When We Were Young," soon followed by his first appearance as Winnie-the-Pooh in the 1926 book, "Winnie-the-Pooh."

Over the past 100 years, Winnie the Pooh quotes have been an excellent source for his wise advice on life, love and friendship.

Based on the collection of small stuffed animals beloved by Milne's son, Christopher Robin Milne, Winnie the Pooh and his friends — Piglet, a fearful pig; Tigger, an excitable tiger; Eeyore, a gloomy and self-deprecating donkey; mother and son kangaroos Kanga and Roo; plus Owl and Rabbit, who Milne made up from his own imagination — have been blessing the lives of children and adults alike, teaching us all deeply important life lessons.

RELATED: 25 Best Disney Movie Quotes To Share With The Person You Love

Sure, some may say an imaginary bear isn't your typical role model, but Winnie the Pooh is so much more than that. Pooh and his friends can teach us all about what it really means to be there for each other, as well as the importance of spending time doing, well... nothing.

These Winnie the Pooh quotes remind us all about the importance of friendship, never taking one another for granted, and cherishing the people we love forever — plus one day.

Be inspired and let your favorite childhood bear take you back in time to remind you of how lucky we all are to have the friends we do.

50 Best Winnie the Pooh Quotes About Friendship, Love and Life

1. “You can’t stay in your corner of the Forest waiting for others to come to you. You have to go to them sometimes.” — Winnie the Pooh 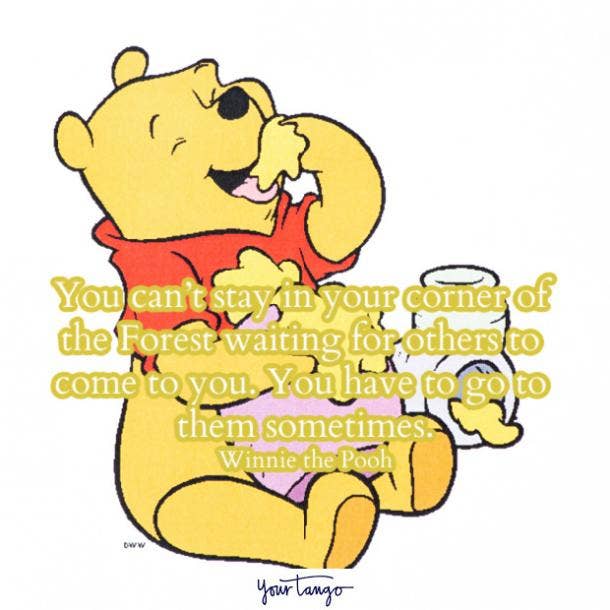 3. “Some people care too much. I think it's called love.” — Winnie the Pooh

4. "What I like doing best is nothing... It means just going along, listening to all the things you can't hear, and not bothering." — Christopher Robin

5. “Sometimes the smallest things take up the most room in your heart.” — Winnie the Pooh 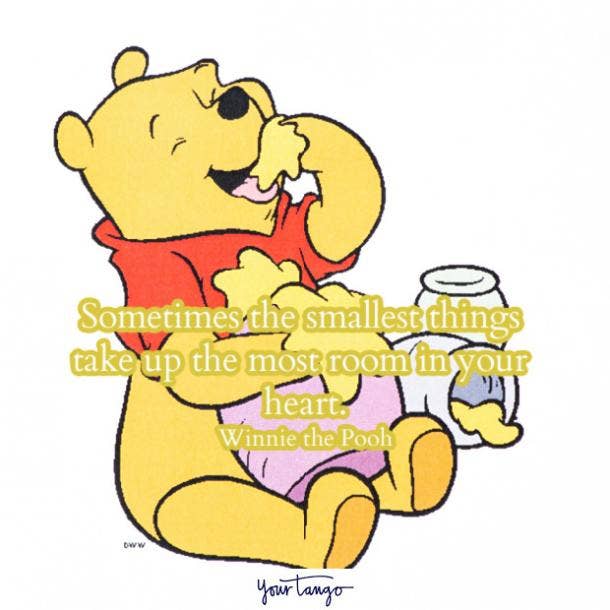 6. “We didn’t realize we were making memories. We just knew we were having fun.” — Winnie the Pooh

7. “A friend is someone who helps you up when you’re down, and if they can’t, they lay down beside you and listen.” — Winnie the Pooh

9. “If there ever comes a day when we can’t be together, keep me in your heart, I’ll stay there forever.” — Winnie the Pooh

10. "A little Consideration, a little Thought for Others, makes all the difference.” — Eeyore 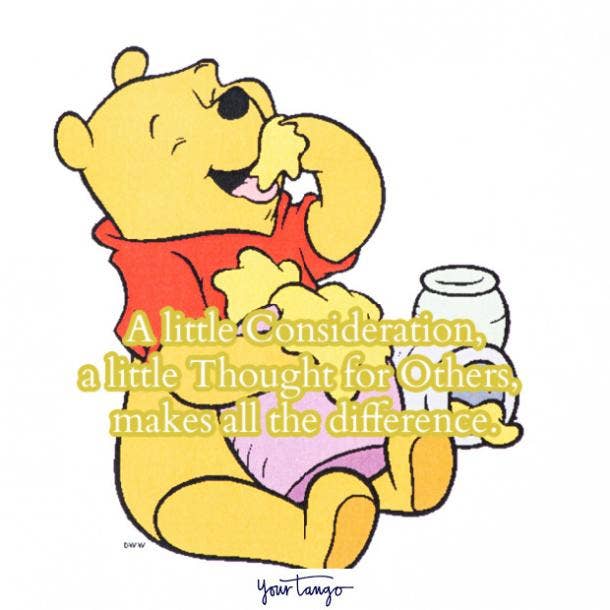 12. “How lucky I am to have something that makes saying goodbye so hard.” — Winnie the Pooh

13. "Just because an animal is large, it doesn't mean he doesn't want kindness." — Winnie the Pooh

14. “Before beginning a hunt, it is wise to ask someone what you are looking for before you begin looking for it.” — Winnie the Pooh

RELATED: 20 Inspiring Pixar Quotes From Iconic Disney Movies That Taught Us Everything We Need To Know About Life & Love

15. “It seemed they had always been, and would always be, friends. Time could change much, but not that.” — Winnie the Pooh 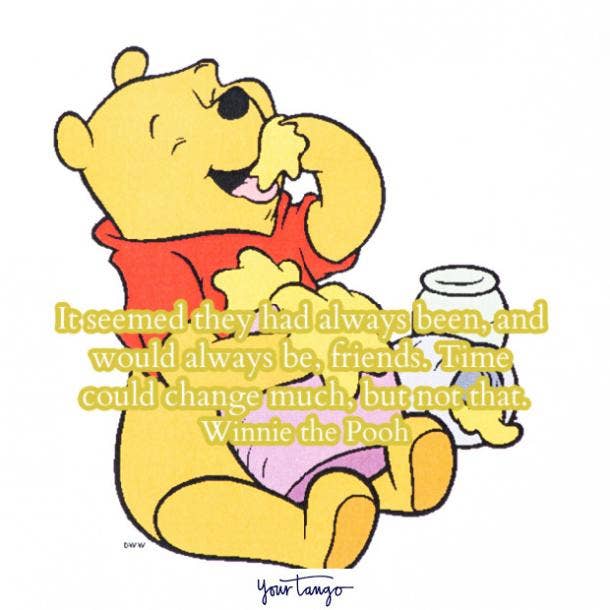 16. “It never hurts to keep looking for sunshine.” — Eeyore

17. “Yesterday, when it was tomorrow, it was too exciting a day for me.” — Winnie the Pooh

18. “Nobody can be uncheered with a balloon. ” — Winnie the Pooh

19. “Always watch where you are going. Otherwise, you may step on a piece of the Forest that was left out by mistake.” — Winnie the Pooh

20. "One thing you should know, no matter where I go, we'll always be together." — Christopher Robin 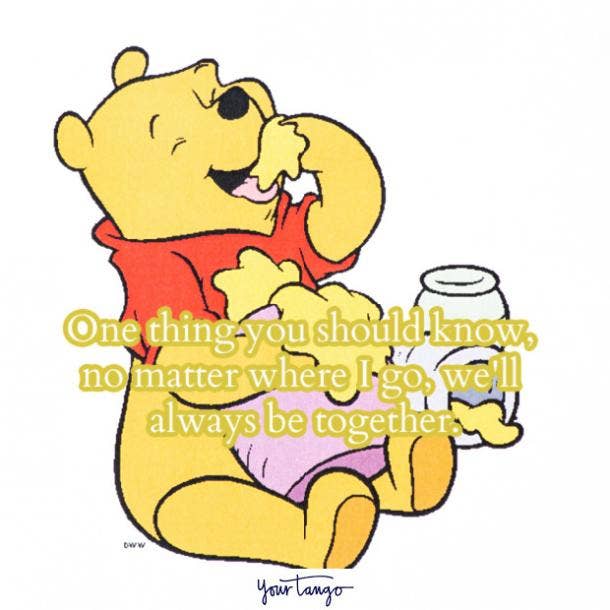 21. “If people are upset because you’ve forgotten something, console them by letting them know you didn’t forget—you just weren’t remembering.” — Winnie the Pooh

23. “If the string breaks, then we try another piece of string.” — Owl

24. "It's the best way to write poetry, letting things come." — Winnie the Pooh

25. “I always get to where I’m going by walking away from where I have been.” — Winnie the Pooh 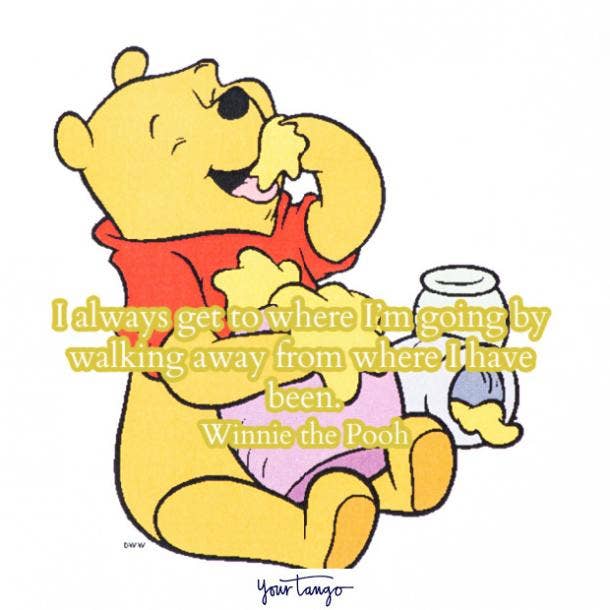 26. “A day without a friend is like a pot without a single drop of honey left inside.” — Winnie the Pooh

27. “You’re braver than you believe, stronger than you seem and smarter than you think.” — Christopher Robin

29. “Here together, friends forever. Some things were just meant to be, and that’s you and me.” — Winnie the Pooh

30. “Rivers know this: There is no hurry. We shall get there some day.” — Winnie the Pooh 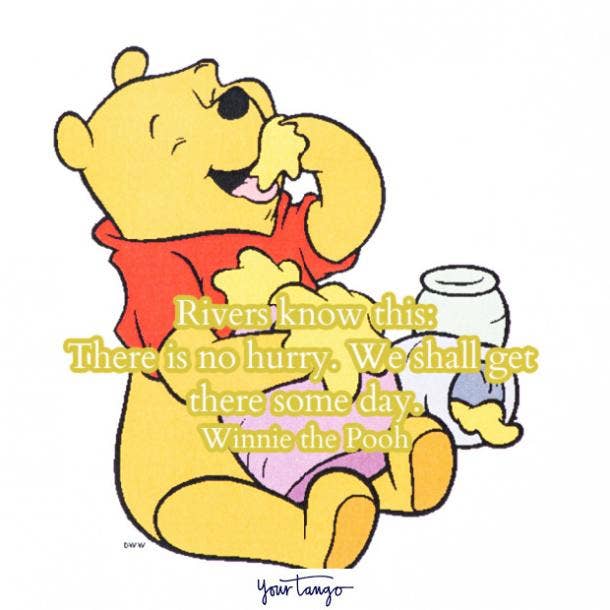 32. “If the person you are talking to doesn’t appear to be listening, be patient. It may simply be that he has a small piece of fluff in his ear.” — Winnie the Pooh

33. “I think we dream so we don’t have to be apart for so long. If we’re in each other’s dreams, we can be together all the time.” — Winnie the Pooh

34. “People say nothing is impossible, but I do nothing every day.” — Winnie the Pooh 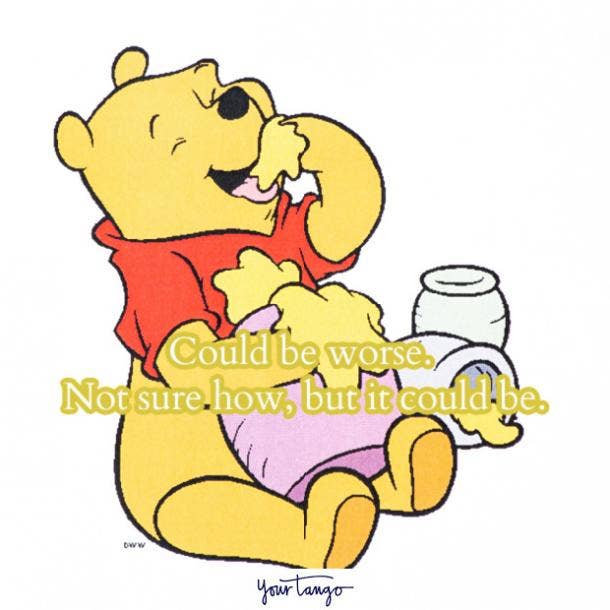 37. "It is always useful to know where a friend-and-relation is, whether you want him or whether you don't." — Rabbit

38. “Owl looked at him, and wondered whether to push him off the tree; but, feeling that he could always do it afterwards, he tried once more to find out what they were talking about.” 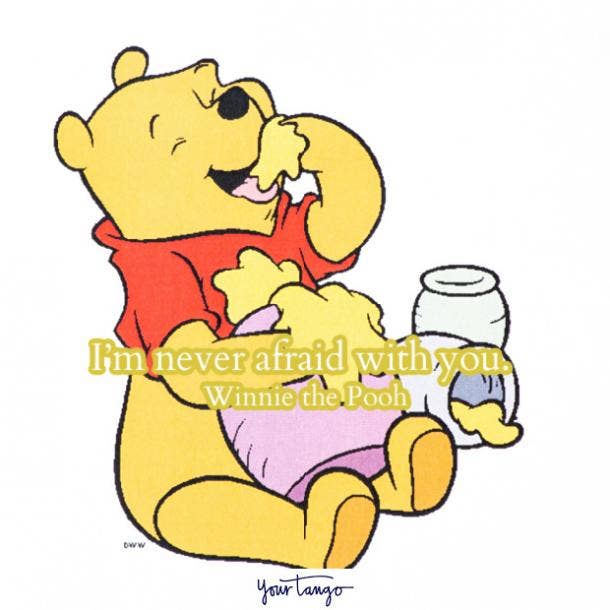 43. “That was a lovely bit just now, when you pretended we were going to fall-bump-to-the-bottom, and we didn’t. Will you do that bit again?” — Roo

44. “When you go after honey with a balloon, the great thing is to not let the bees know you’re coming.” — Winnie the Pooh

45. "Do you think you could very kindly lean against me, 'cos I keep pulling so hard that I fall over backwards." — Christopher Robin 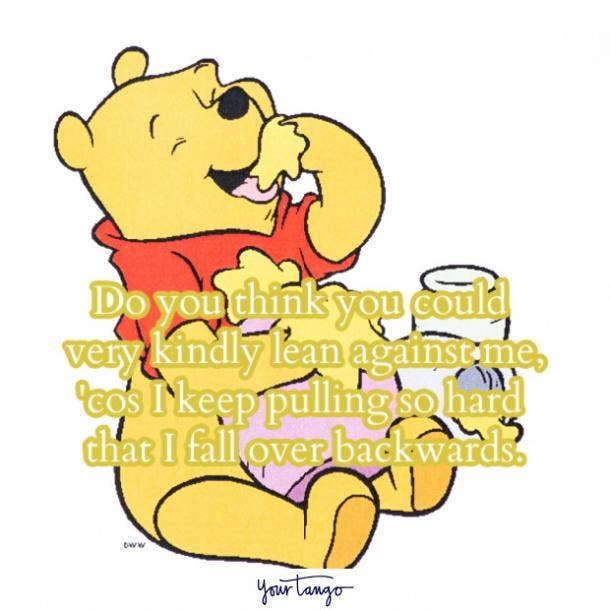 48. “It isn’t much good having anything exciting, if you can’t share it with somebody.” — Winnie the Pooh

49. "You're the only one who seems to understand about tails. They don't think — that's what's the matter with some of these others. They've got no imagination. A tail isn't a tail to them, it's just a Little Bit Extra at the back." — Eeyore

50. "Silly old bear, I won't ever forget about you." — Christopher Robin

RELATED: 38 Alice In Wonderland Quotes To Help You Make Sense Of The Nonsense In Life

Madelyn Rennie is a writer and frequent contributor to YourTango.