Many awoke to this morning to the sad news that General Colin Powell, whose quotes on leadership inspired many over the last several decades, passed away on October 18, 2021. Powell, who was 84 years old, was being treated for multiple myeloma, a form of blood cancer, leaving his immune system compromised.

He leaves behind his wife Alma and their three children son Michael Powell and daughters Linda Powell and Annemarie Powell. In a statement issued on Facebook, his family shared the following message regarding his death:

"General Colin L. Powell, former U.S. Secretary of State and Chairman of the Joint Chiefs of Staff, passed away this morning due to complications from Covid 19. He was fully vaccinated. We want to thank the medical staff at Walter Reed National Medical Center for their caring treatment. We have lost a remarkable and loving husband, father, grandfather and a great American."

RELATED: 60 Best Inspirational Life Quotes To Live By Each Day

Colin Luther Powell was born on April 5, 1937, in Harlem and was raised in the South Bronx. The son of Jamaican immigrants of mixed African and Scottish ancestry, he attended City College of New York, graduating in 1958. While studying there, he joined the Reserve Officers' Training Corps (ROTC), which he later described as one of the happiest experiences of his life.

He went on to become a famous American politician, diplomat, and four-star general served as the 65th United States Secretary of State from 2001 to 2005 — the first-ever African-American to hold the position.

In June 2020, he famously addressed then-President Donald Trump's approach to leading the United States through the pandemic, systemic racism, and police brutality, telling CNN's Jake Tapper, "We have a Constitution. And we have to follow that Constitution. And the President has drifted away from it."

As a former Republican Secretary of State with prominent leadership experience under six U.S. presidents, Powell had a deep understanding of what makes our nation tick.

Throughout his political career, Powell shared many powerful quotes on leadership, decision-making, success and teamwork that have served — and will continue to serve — as a source of inspiration and guidance.

1. "Great leaders are almost always great simplifiers, who can cut through argument, debate and doubt, to offer a solution everybody can understand."

3. "Surround yourself with people who take their work seriously, but not themselves, those who work hard and play hard."

5. "Leadership is solving problems. The day soldiers stop bringing you their problems is the day you have stopped leading them. They have either lost confidence that you can help or concluded you do not care. Either case is a failure of leadership." 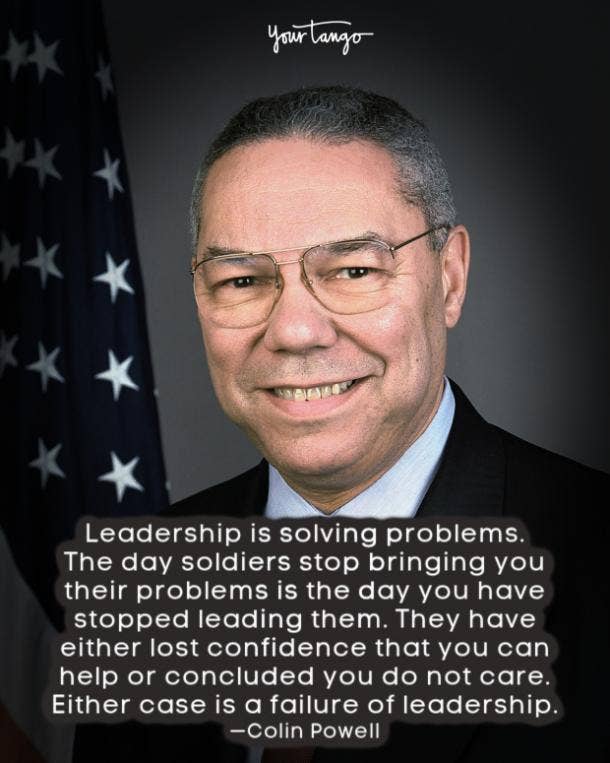 Photo: Department of State of the United States of America, Public domain, via Wikimedia Commons

6. "Success is the result of perfection, hard work, learning from failure, loyalty, and persistence."

7. "If you are going to achieve excellence in big things, you develop the habit in little matters. Excellence is not an exception; it is a prevailing attitude."

8. "Don't be afraid to challenge the pros, even in their own backyard."

9. "Diplomacy is listening to what the other guy needs. Preserving your own position, but listening to the other guy. You have to develop relationships with other people so when the tough times come, you can work together." 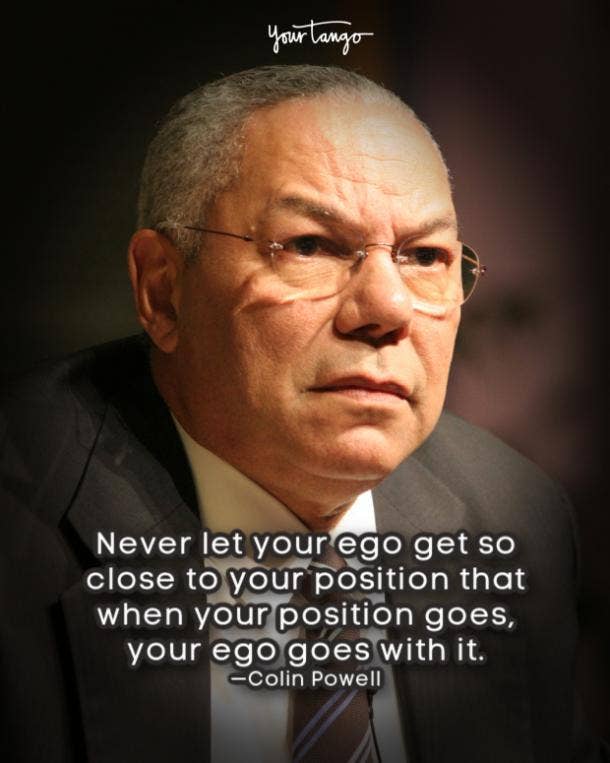 11. “Never neglect details. When everyone’s mind is dulled or distracted the leader must be doubly vigilant.”

13. “Perpetual optimism is a force multiplier.”

14. "Don’t just show kindness in passing or to be courteous. Show it in-depth, show it with passion, and expect nothing in return. Kindness is not just about being nice; it’s about recognizing another human being who deserves care and respect.”

15. "There are no secrets to success. It is the result of preparation, hard work, and learning from failure."

16. “I think whether you’re having setbacks or not, the role of a leader is to always display a winning attitude.”

17. “Always show more kindness than seems necessary because the person receiving it needs it more than you will ever know.”

19. “Trust is the glue that holds people together and is the lubricant that keeps an organization moving forward.”

RELATED: 50 Inspirational Quotes About Change To Get You Out Of Your Slump

21. “Look for intelligence and judgment and most critically, a capacity to anticipate, to see around corners. Also look for loyalty, integrity, a high energy drive, a balanced ego, and the drive to get things done.”

22. “The best method of overcoming obstacles is the team method.”

23. “Organization doesn’t really accomplish anything. Plans don’t accomplish anything, either. Theories of management don’t much matter. Endeavors succeed or fail because of the people involved. Only by attracting the best people will you accomplish great deeds.”

24. “In other words, don’t expect to always be great. Disappointments, failures, and setbacks are a normal part of the lifecycle of a unit or a company and what the leader has to do is constantly be up and say, we have a problem, let’s go and get it.”

25. “The freedom to be your best means nothing unless you are willing to do your best.”

27. “Good leaders set vision, missions, and goals. Great leaders inspire every follower at every level to internalize their purpose, and to understand that their purpose goes far beyond the mere details of their job. When everyone is united in purpose, a positive purpose that serves not only the organization but also, hopefully, the world beyond it, you have a winning team.”

28. “We need to understand that we as citizens and as a government in any community throughout this country have no more important obligation than to educate those who are going to replace us.”

29. “War should be the politics of last resort. And when we go to war, we should have a purpose that our people understand and support.”

30. “Have fun in your command. Don’t always run at a breakneck pace. Take leave when you’ve earned it, spend time with your families.”

31. "The healthiest competition occurs when average people win by putting above average effort.”

32. “Each of us is a product of all our experiences and all our interactions with other people.”

33. “If you get the dirty end of the stick, sharpen it and turn it into a useful tool.”

34. “The ties that bind us are stronger than the occasional stresses that separate us.”

35. “If you take the pay, earn it. Always do your very best. Even when no one else is looking, you always are. Don’t disappoint yourself.”

36. “When we are debating an issue, loyalty means giving me your honest opinion, whether you think I’ll like it or not. Disagreement, at this stage, stimulates me. But once a decision has been made, the debate ends. From that point on, loyalty means executing the decision as if it were your own.”

37. "If you are going to achieve excellence in big things, you develop the habit in little matters. Excellence is not an exception,it is a prevailing attitude."

38. "When we are debating an issue, loyalty means giving me your honest opinion, whether you think I'll like it or not. Disagreement, at this stage, stimulates me. But once a decision has been made, the debate ends. From that point on, loyalty means executing the decision as if it were your own."

39. "Procrastination in the name of reducing risk actually increases risk."

41. “My own experience is to use the tools that are out there. Use the digital world. But never lose sight of the need to reach out and talk to other people who don’t share your view. Listen to them and see if you can find a way to compromise.”

RELATED: 50 Encouraging Quotes For When You Need A Little Positive Inspiration

Emily Francos is a writer ;who covers astrology, pop culture and relationships.