Everyone remembers Ruth Bader Ginsburg as a pioneer for gender equality.

Ginsburg changed the way the world views American women, and for more than a decade, she led fights in the courts for equality among women.

She also worked to persuade the courts that the 14th amendment guarantee of equal protection applies not just to racial and ethnic minorities, but to women as well.

She served on the Supreme Court for 27 years, becoming one of its most prominent members over time until her death in 2020.

Ruth Bader Ginsburg was a monumental figure in her representation for equal rights among everyone, and she will be remembered for her resilient attitude in a world that did not want to see her succeed.

Here are 35 Ruth Bader Ginsburg quotes that prove she was both powerful and inspiring.

1. “I would like to be remembered as someone who used whatever talent she had to do her work to the very best of her ability.”

2. “I don’t say women’s rights — I say the constitutional principle of the equal citizenship stature of men and women.” 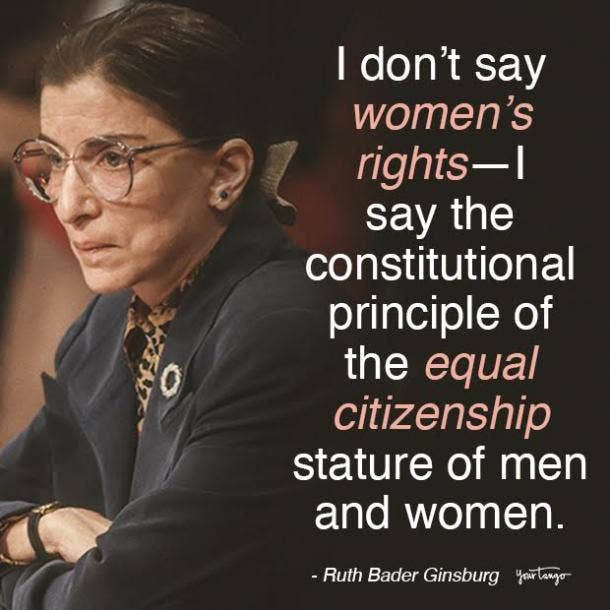 3. “Women will have achieved true equality when men share with them the responsibility of bringing up the next generation.”

4. “Real change, enduring change, happens one step at a time.

5. “I didn’t change the Constitution; the equality principle was there from the start. I just was an advocate for seeing its full realization.”

6. “Women belong in all places where decisions are being made. It shouldn’t be that women are the exception.”

7. “Fight for the things that you care about, but do it in a way that will lead others to join you.”

8. “Feminism — I think the simplest explanation, and one that captures the idea, is a song that Marlo Thomas sang, ‘Free To Be You and Me.’ Free to be, if you were a girl — doctor, lawyer, Indian chief. Anything you want to be.”

9. “The side that wants to take the choice away from women and give it to the state, they’re fighting a losing battle. Time is on the side of change.”

10. “I’m sometimes asked, ‘When will there be enough?’ and my answer is, ‘When there are nine.’ People are shocked. But there’d been nine men, and nobody’s ever raised a question about that.”

11. “I tell law students… if you are going to be a lawyer and just practice your profession, you have a skill — very much like a plumber. But if you want to be a true professional, you will do something outside yourself… something that makes life a little better for people less fortunate than you.”

12. “If you’re a boy and you like teaching, you like nursing, you would like to have a doll, that’s OK. We should each be free to develop our own talents, whatever they may be, and not be held back by artificial barriers.”

13. “Indeed, in my lifetime, I expect to see three, four, perhaps even more women on the High Court Bench, women now shaped from the same mold, but of different complexions.”

14. “I ask no favor for my sex. All I ask of our brethren is that they take their feet off our necks.”

15. "If you have a caring life partner, you help the other person when that person needs it. I had a life partner who thought my work was as important as his, and I think that made all the difference for me."

16. "Think back to 1787. Who were 'we the people'? … They certainly weren't women … they surely weren't people held in human bondage. The genius of our Constitution is that over now more than 200 sometimes turbulent years that 'we' has expanded and expanded."

17. “When a thoughtless or unkind word is spoken, best tune out. Reacting in anger or annoyance will not advance one’s ability to persuade.”

18. “Don’t be distracted by emotions like anger, envy, resentment. These just zap energy and waste time.”

19. “When a thoughtless or unkind word is spoken, best tune out.”

20. “Reading is the key that opens doors to many good things in life. Reading shaped my dreams, and more reading helped me make my dreams come true.” 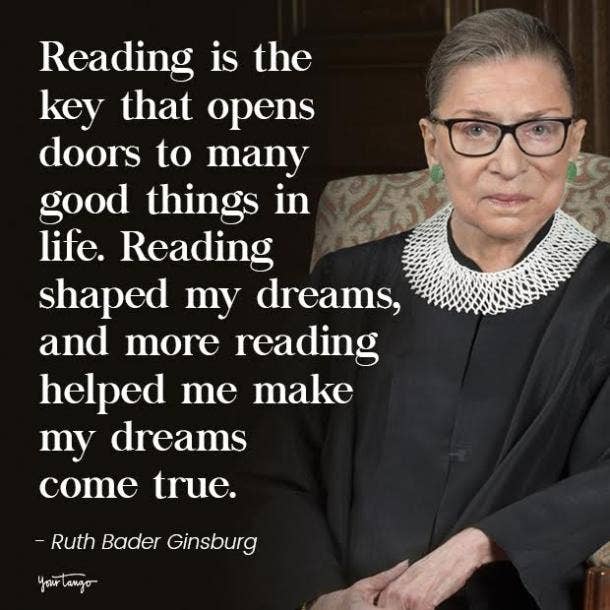 21. “You can disagree without being disagreeable.”

22. “Yet what greater defeat could we suffer than to come to resemble the forces we oppose in their disrespect for human dignity?”

23. “The decision whether or not to bear a child is central to a woman’s life, to her well-being and dignity. It’s a decision she must make for herself.”

24. “So often in life, things that you regard as an impediment turn out to be great, good fortune.”

25. “When contemplated in its extreme, almost any power looks dangerous.”

26. “For both men and women the first step in getting power is to become visible to others, and then to put on an impressive show... As women achieve power, the barriers will fall. As society sees what women can do, as women see what women can do, there will be more women out there doing things, and we’ll all be better off for it.”

27. “You go on to the next challenge and you give it your all. These important issues are not going to go away.”

28. “I’m a very strong believer in listening and learning from others.”

29. “I became a lawyer for selfish reasons. I thought I could do a lawyer’s job better than any other.”

30. “I remember envying the boys long before I even knew the word feminism because I liked shop better than cooking or sewing.” 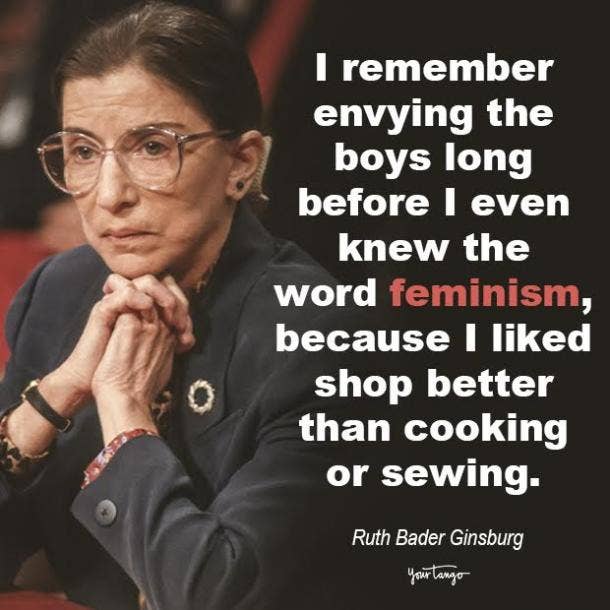 31. “If you want to influence people, you want them to accept your suggestions, you don’t say, ‘You don’t know how to use the English language,’ or ‘how could you make that argument?’ It will be welcomed much more if you have a gentle touch than if you are aggressive.”

32. “My hope is that we will get back to the way it once was, that kind of collegiality, good relations, people who liked and respected each other even though they disagreed on some important questions.”

34. “I always thought that there was nothing an antifeminist would want more than to have women only in women’s organizations, in their own little corner empathizing with each other and not touching a man’s world. If you’re going to change things, you have to be with the people who hold the levers.”

35. “I do think that I was born under a very bright star. Because if you think about my life, I get out of law school. I have top grades. No law firm in the city of New York will hire me. I end up teaching; it gave me time to devote to the movement for evening out the rights of women and men.”

Nia Tipton is a writer living in Brooklyn. She covers pop culture, social justice issues, and trending topics. Follow her on Instagram.