Anime is hand-drawn animation that comes from Japanese culture.

Despite being animated, the characters are very complex and some have saddening and heartbreaking pasts or lives that they have to struggle with, which leads to relatable sad anime quotes from the shows.

You can feel the deep emotion and sadness even in characters that aren't real because you can relate to the feelings of heartbreak, loneliness, depression, and pain.

1. “You idiot. You’d gotten yourself up in a tizzy about romance, right? 'Love' you experience in that state is just self-delusion. There’s no point in getting depressed over love like that.” — Kyouya Sata, "Wolf Girl and Black Prince"

RELATED: Which Naruto Character Are You, By Zodiac Sign? 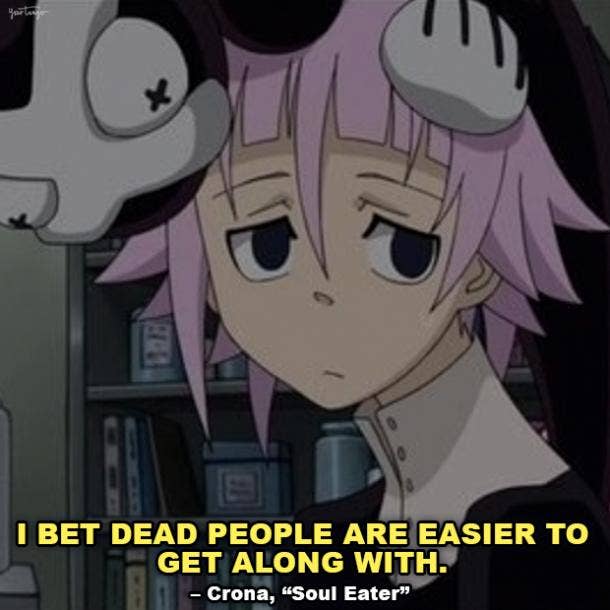 4. “The loneliest people are the kindest. The saddest people smile the brightest. The most damaged people are the wisest. All because they don’t wish to see anyone else suffer the way they did.” — Jellal Fernandes, "Fairy Tail" 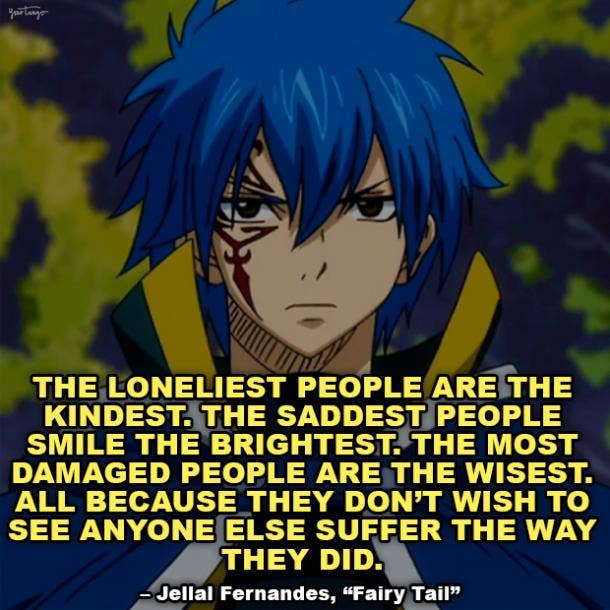 5. "It’s just like changes in the notes and passports. You may find it hard to adjust to at the beginning, but you get used to it eventually. Time is very depressing after all… Both happiness and sadness fade away with time.” — Detective Conan, "The Case Closed"

6. “The thing I wished for destroyed my whole family. I brought all this suffering down on my family because I made a wish for my dad without knowing what he really wanted.” — Kyoko Sakura, "Puella Magi Madoka Magica" 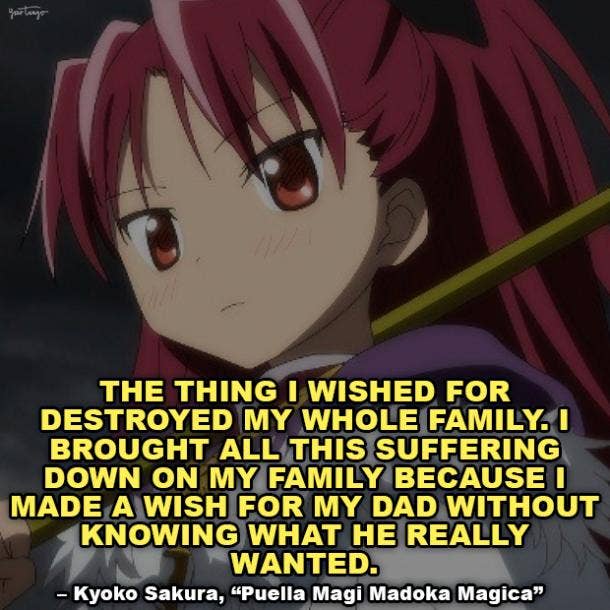 7. “It is impossible to not hurt someone. Humans unconsciously hurt others by simply existing. Whether you are alive or dead, you keep hurting people. Getting involved will hurt them, but trying not to get involved might hurt them too. But if it’s someone you don’t care about, you won’t notice you’ve hurt them. What’s important is your awareness of it. It’s because you care about them, that you feel like you’ve hurt them. Caring about someone means being resolved to the fact that you’ll hurt them. The more people care for each other, the farther out of reach certain things get. But that’s not something to be sad about, I think it’s probably something to be proud of.” — Shizuka Hiratsuka, "Yahari Ore no Seishun Love Come wa Machigatteiru"

8. “Kakarot… please… destroy Frieza… He made me what I am. Don’t…let him… do it… to anyone else. whatever it takes… Stop him… Please.” —Vegeta, "Dragon Ball Z" 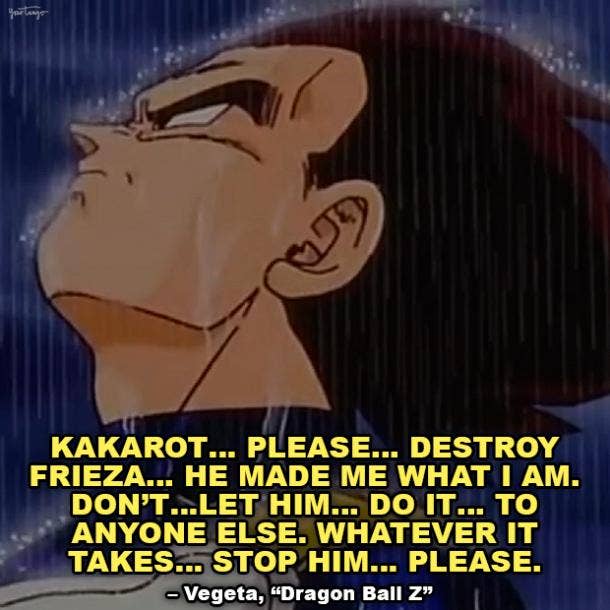 9. “I always believed that everyone in this world was far nicer and smarter than me. That no matter how unlikeable they seemed to be, they still had a good conscience and had justifiable circumstances for acting the way they did. That’s why I hated myself for being so timid and depressed when I didn’t even have any good reason for doing so. …But now I see that there actually are people who’re despicable in every way and don’t blink twice at ruining another’s life.” — Punpun Onodera, "Goodnight Punpun"

10. “All this time, I seriously thought that it’s better to die than to live your life alone.” — Kirito, "Sword Art" 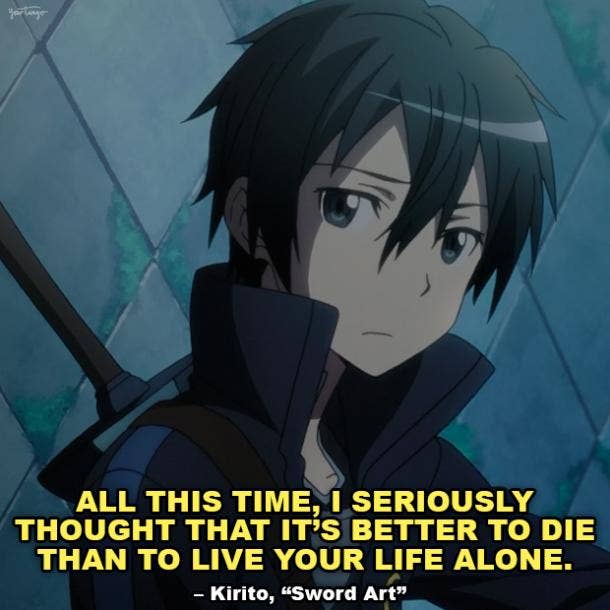 11. “If you don’t like how things turned out, then try to change it. And then if it still doesn’t work out, that’s when you can be depressed.” — Nanana Ryuugajou, "Nanana Ryūgajō's Buried Treasure"

12. “The two of us aren’t so different. My whole life I’ve desired from others. I felt bitter to the people around me and I closed off my heart. And a heart that lets nothing in, will become empty before you realize it.” — Mei Aihara, "Citrus" 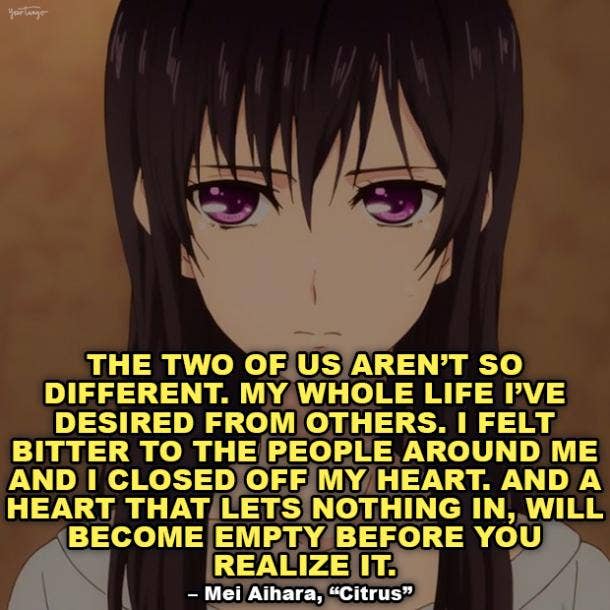 13. “No matter how hurt someone is, they’re meant to overcome it and try to go forward.” — Mirajane Strauss, "Fairy Tail"

14. “I think death is equally terrible for everyone. Young people, old people, the good, the bad; it’s always the same. It’s rather fair in its treatment. There’s no such thing as a terrible death, that’s why it’s frightening.” — Sunako, "Yamato Nadeshiko Shichi Henge" 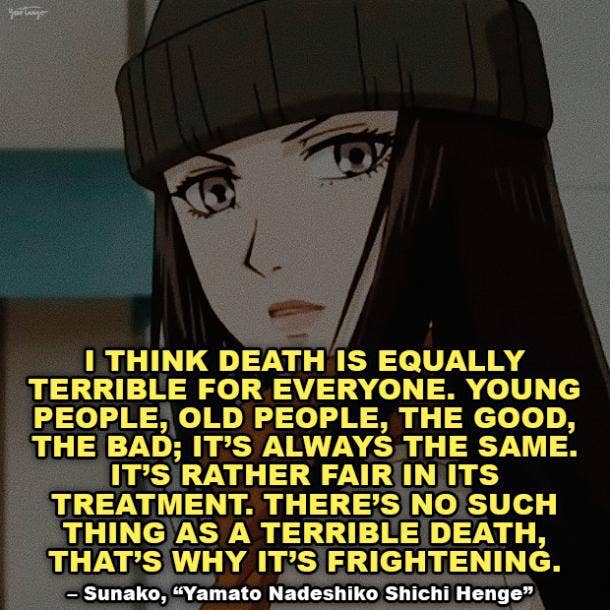 15. “I’d rather have my physical pain exceed my mental pain than the other way around. By hurting myself just enough, I could turn my attention to that.” — Kusunoki, "Eromanga Sensei"

16. “Having happy and beautiful memories won’t always bring you salvation. The more beautiful a memory is, the more painful it can become. It can even become terrifying. Both for the one who’s leaving… And for the one left behind.” — Isla, "Plastic Memories" 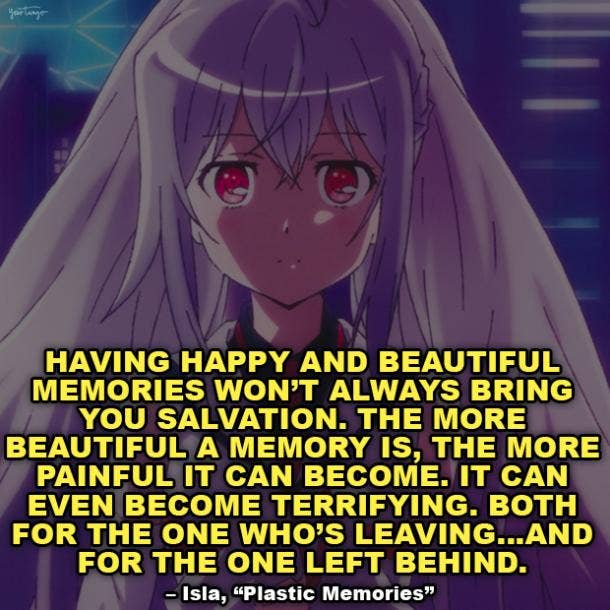 17. “I’m such a hopeless idiot. All this time and I haven’t grown up one bit. I thought maybe the rain would wash away some of this gloom that’s been following me… but right now, every drop that hits my face is even more depressing.” — Edward Elric, "Fullmetal Alchemist"

18. "I wish people who say: 'I’d rather die' would actually die before they say it. So that they’ll know how I feel.” — Subaru Natsuki, "Re: Zero − Starting Life in Another World" 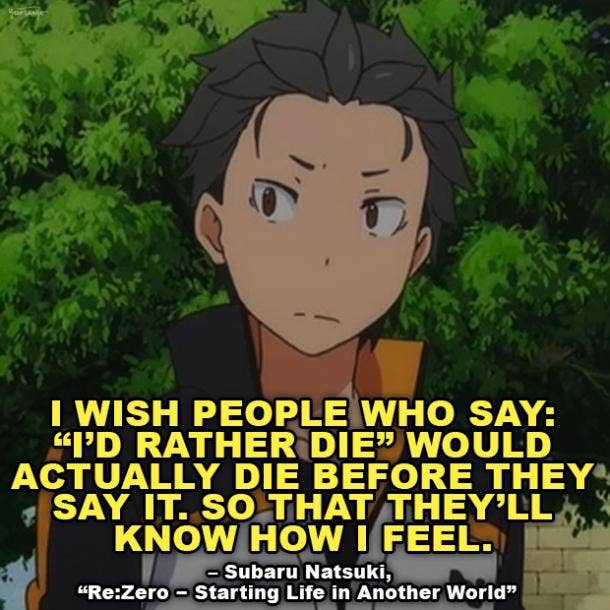 19. “I’ll never resent you, or hate you, or hurt you. Not ever. Not you or anyone. I’d rather die. So If I’m killed, I’ll face my killer with a smile. And I’ll tell them that it’s okay because it won’t be their fault for doing it. It’ll just be that they don’t know any better. I’ll die hopeful, that my death might have helped them… to understand someday.” — Photo, "Kino’s Journey"

20. “Are you listening God? The thing is, mom and dad don’t like each other anymore. And it’s my fault for being such a useless daughter.” — Hatori Shikishima, "Alice & Zoroku" 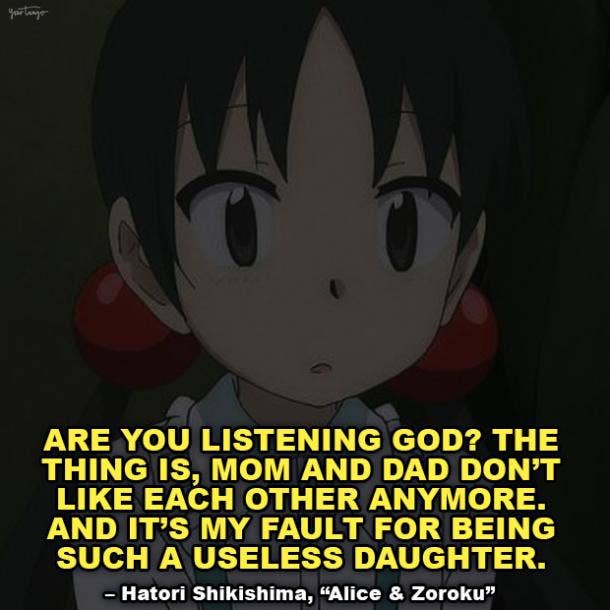 21. “How long are you gonna sit in front of me sobbing your little eyes out?! It’s depressing!” — Sohma Rin, "Fruit Basket"

22. “If you let yourself get depressed, you’d be making light of the people who trust and follow you.” — Ogami Rei, "Code: Breaker" 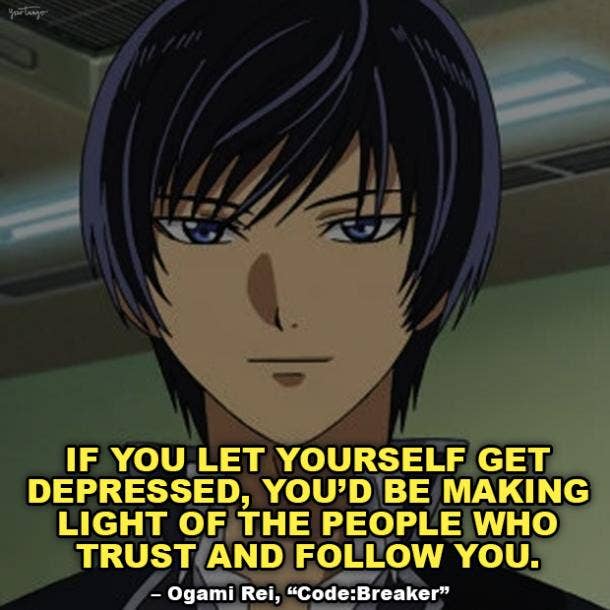 23. “It would be enough for the depressing things in life to only exist in reality.” — Shiori Misaka, "Kanon"

24. “Stress makes you bald, but it’s stressful to avoid stress, so you end up stressed out anyway. In the end, there’s nothing you can do.” — Gintoki Sakata, "Gin Tama" 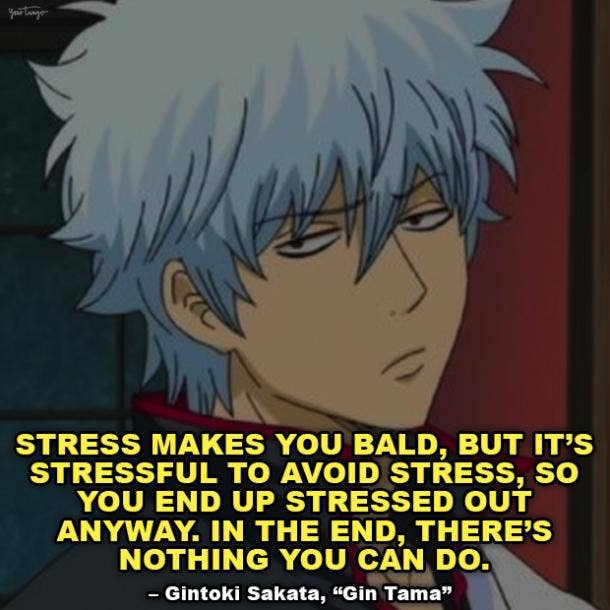 25. “I hate humans. I find the thought that I’m from the same species to be depressing.” — Koko Hekmatyar, "Jormungand"

26. "Cry when you’re sad. Laugh when you’re happy. Get angry when you don’t like something. Depend on someone when you’re depressed. Care for yourself before you care for others. Don’t hate anyone. Be proud of yourself. Stay loyal when you fall in love.” — Otonashi Maria, "Hakomari" 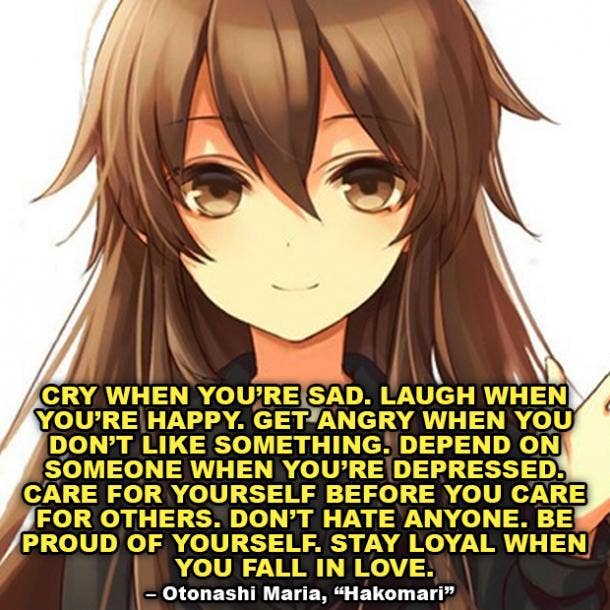 28.  “The past makes you wanna die out of regret and the future makes you depressed out of anxiety. So by elimination, the present is likely the happiest time.” — Hachiman Hikigaya, "Yahari Ore no Seishun Love Come wa Machigatteiru" 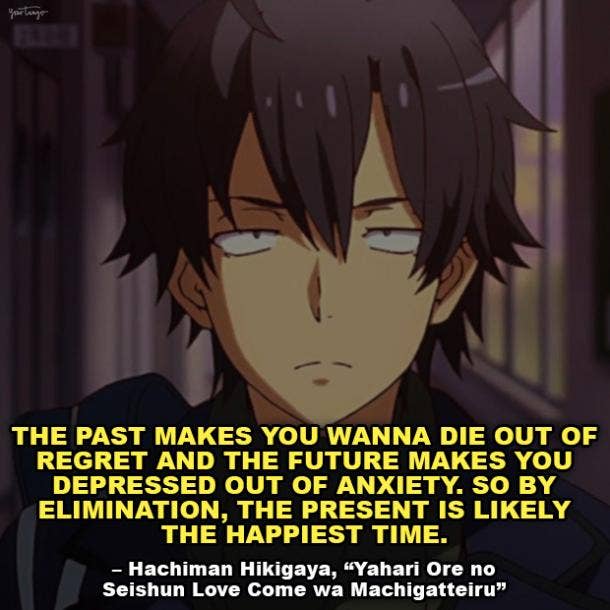 30. “People like us aren’t qualified to be involved in a dramatic incident such as a suicide. No matter how depressed you are or how much pain you’re in, you have to return to your routine, daily life. Even if you don’t come back, you’ll just end up dying in vain. A dramatic death isn’t befitting of us.” — Kaoru Yamazaki, "Welcome to the NHK"

RELATED: 5 Reasons Why Every Woman Needs To Fangirl At A Comic Con Event (At Least Once!)