Chances are, you may have heard about Marie Curie, but probably not Rosalind Franklin or Marie Maynard Daly. That's something the people behind the International Day of Women and Girls in Science hopes to change.

Growing up, we learn about Thomas Edison and Albert Einstein and all the other larger-than-life male scientists who made huge contributions to our quality of life (and thanks for the light bulb, it's dope).

But what about the ladies?! Though women were — and continue to be — largely kept out of scientific professions, they've still managed to break barriers and discover some awesome stuff.

Our girl, Marie Curie, was not only the first woman to be a professor of general physics but also won the Nobel Prize in 1911 for discovering radium and polonium. Franklin was the one who revealed the helical shape of the DNA molecule. And Daly discovered the connection between cholesterol and high blood pressure.

Where was that in our history books? Women have been impactful in all STEM fields — science, technology, engineering and mathematics — but many textbooks still barely mention them.

To do our small part toward inspiring more girls to fully explore their interests in science, we gathered this collected of quotes from some of the most inspirational female scientists we could find. Enjoy!

25 Inspirational Quotes From Women In Science

1. "I am among those who think that science has great beauty."— Marie Curie 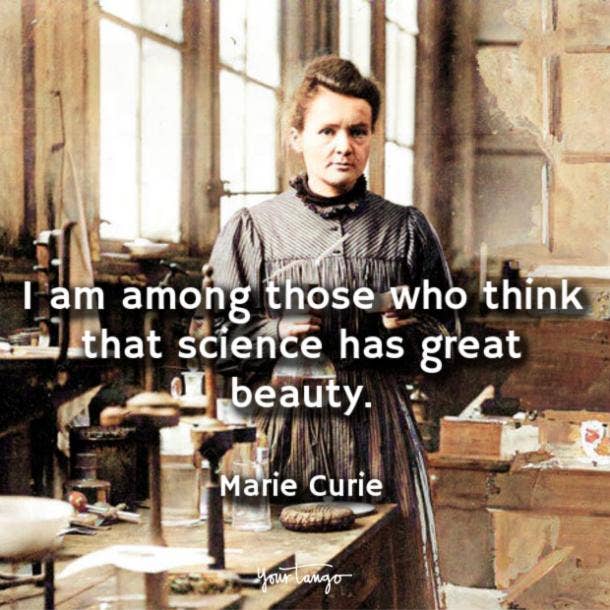 Marie Curie, whose full name was Marie Salomea Skłodowska Curie, was a Polish and naturalized-French physicist and chemist who conducted pioneering research on radioactivity. The work she did was demanding and fatal, but that didn't stop her from discovering polonium and radium. She never had a fancy laboratory for her work, yet gained success never the less. She was even labeled the 'mother of modern physics.'

2. "If you know you are on the right track, if you have this inner knowledge, then nobody can turn you off... no matter what they say." — Barbara McClintock, Scientist and Cytogeneticist

Barbara McClintock was a scientist and cytogeneticist who was awarded the 1983 Nobel Prize in Physiology or Medicine. She discovered a chromosome-breaking locus that could change its position within a chromosome; it is now known as genetic transposition. She termed these “jumping genes”.

3. "Science, for me, gives a partial explanation for life. In so far as it goes, it is based on fact, experience and experiment." — Rosalind Franklin, Chemist and X-ray Crystallographer

Franklin was a chemist, molecular biologist, and one of the key figures behind unlocking the structure of human DNA. She also helped find the molecular structure of RNA, viruses, coal, and graphite.

4. "Don't let anyone rob you of your imagination, your creativity, or your curiosity. It's your place in the world; it's your life. Go on and do all you can with it, and make it the life you want to live.” — Mae Jemison, Engineer, Physician and Former NASA Astronaut

Mae Jemison is the first African American woman to travel into space where she conducted experiments on weightlessness and motion sickness. On top of that, Jemison is an engineer and physician.

5. "My parents didn’t discourage me because I was a woman… I knew I was a good student." — Marie Maynard Daly, Chemist 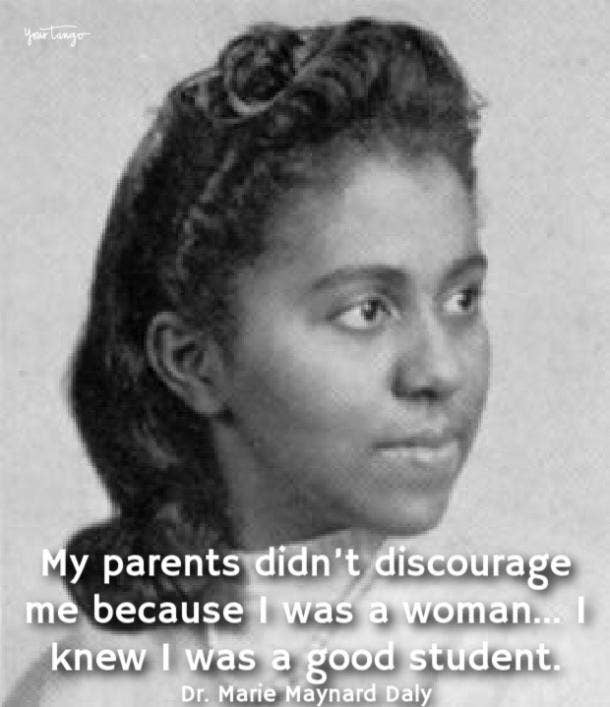 Marie Daly was the first African-American woman in the US to earn a Ph.D. in chemistry. Daly discovered the connection between cholesterol and high blood pressure, saving millions of lives with her research.

6. “What you do makes a difference, and you have to decide what kind of difference you want to make.” — Jane Goodall, Primatologist and Anthropologist

Dame Jane Morris Goodall DBE, formerly Baroness Jane van Lawick-Goodall, is an English primatologist and anthropologist, is known as the world's primary (see what we did there) expert on chimpanzees.

7. “All sorts of things can happen when you’re open to new ideas and playing around with things.” — Stephanie Kwolek, Chemist

Stephanie Kwolek was a chemist who invented Kevlar. She discovered synthetic fibers that were so strong that steel bullets couldn't penetrate them. She is the winner of the Lavoisier Medal for technical achievements.

8. “The more clearly we can focus our attention on the wonders and realities of the universe about us, the less taste we shall have for destruction.” — Rachel Carson, Marine Biologist

Rachel Carson was an American world-renowned marine biologist, author, and conservationist. Her book "Silent Spring" is credited with advancing the global environmental movement.

9. “I didn’t want to just know names of things. I remember really wanting to know how it all worked.” — Elizabeth Blackburn, Molecular Biologist

Elizabeth Blackburn evolved from a self-described “lab rat” to an avid explorer in the realms of health and public policy. She discovered the molecular structure of telomeres and co-discovered the enzyme telomerase, both of which are essential for cellular division and DNA replication. Her work won her the 2009 Nobel Prize for Physiology or Medicine

10. "It is shameful that there are so few women in science... There is a misconception in America that women scientists are all dowdy spinsters. This is the fault of men." — Chien-Shiung Wu, Physicist 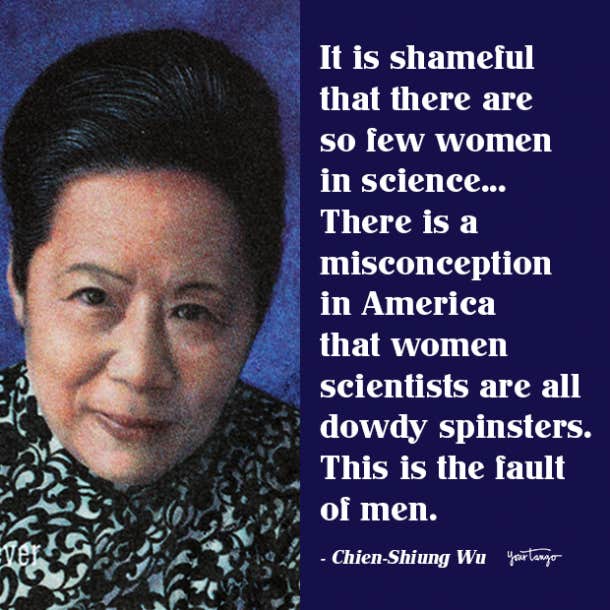 Chien-Shiung Wu was a particle and experimental physicist; Wu worked on the Manhattan Project where she helped develop a process for separating uranium metal into U-235 and U-238 isotopes by gaseous diffusion.

11. "Let us choose for ourselves our path in life, and let us try to strew that path with flowers." — Émilie du Châtelet, Natural Philosopher and Mathematician

12. "We especially need imagination in science. It is not all mathematics, nor all logic, but it is somewhat beauty and poetry." — Maria Mitchell, Astronomer

Maria Mitchell was an American astronomer. In 1847, she discovered a comet which was later known as “Miss Mitchell’s Comet”. She won a gold medal prize for her discovery presented by King Christian VIII of Denmark in 1848.

13. "I hadn't been aware that there were doors closed to me until I started knocking on them." — Gertrude B. Elion, Biochemist and Pharmacologist

Gertrude "Trudy" Belle Elion was an American biochemist and pharmacologist. She discovered a series of drugs that attack the life cycle of nucleic acid. She shares her 1988 Nobel Prize in Physiology or Medicine with George H. Hitchings and Sir James Black.

14. "With men you're expected to do well and get the support, but for females, you have to sacrifice something in a different way from men... I think it's very important for other woman to see that I have had success." — May-Britt Moser, Psychologist and Neuroscientist

May-Britt Moser is a Norwegian psychologist and neuroscientist. Moser discovered a type of cell that is important for determining position close to the hippocampus. She is currently a Professor of Psychology and Neuroscience at the Norwegian University of Science and Technology

15. "Life need not be easy, provided only that it is not empty." — Lise Meitner, Physicist 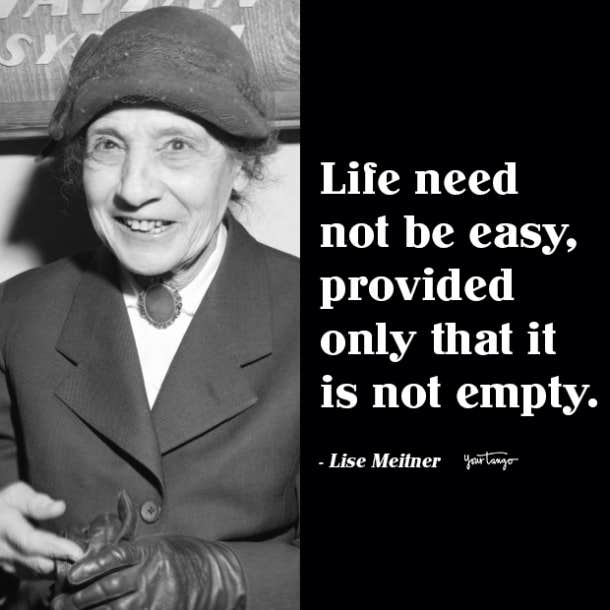 Elise Meitner also known as Lise Meitner, was a leading Austrian-Swedish physicist who was one of those responsible for the discovery of the element protactinium. She is also the reason we understand nuclear fission today. Albert Einstein nicknamed her the “German Marie Curie.”

17. “We’ve tended to forget that no computer will ever ask a new question.” — Grace Hopper, Computer Scientist and United States Navy Rear Admiral

18 “Basically, I have been compelled by curiosity.” — Mary Leakey, Paleoanthropologist

Mary Leakey is a fossil hunter who discovered several of our early ancestors. She is best known for excavating an 86-foot long trail of human footprints dated at almost 4 million years ago. She proved our ancestors were already bipedal and had feet like ours.

19. "The women did what they were told to do. They didn’t ask questions or take the task any further. I asked questions; I wanted to know why. They got used to me asking questions and being the only woman there.” — Katherine Johnson, NASA Mathematician

Katherine Johnson was one of a group of Black women mathematicians at NASA whose important work went virtually unknown until they were the subjects of the 2016 Academy Award-nominated film, "Hidden Figures," in which Johnson was portrayed by Taraji P. Henson. She is said to have referred to herself and the women working with her as "computers who wore skirts."

20. “If you want to change the future, start living as if you’re already there.” — Lynn Conway, Computer Scientist, Electrical Engineer and Inventor 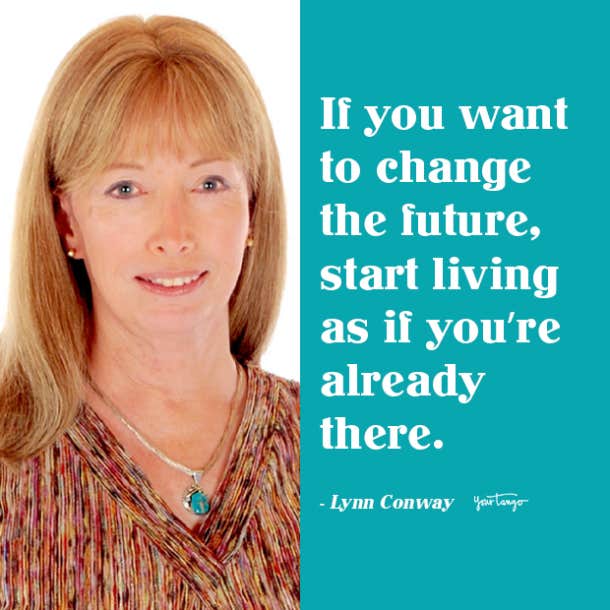 Lynn Conway is a computer scientist, electrical engineer, inventor, and transgender activist. She is credited with several pioneering computer systems.

21. "I don’t fear death because I don’t fear anything I don’t understand." — Hedy Lamarr, Actress and Inventor

Hedy Lamarr is credited with designing the very first computer program showing the world that computers can be much more than just calculators. She even did this in the 1940s, which was way before the tech boom.

22. “I don't have any particular recipe. It is the reason why doing research is challenging as well as attractive. It is like being lost in a jungle and trying to use all the knowledge that you can gather to come up with some new tricks, and with some luck, you might find a way out.” — Maryam Mirzakhani, Mathematician

Maryam Mirzakhani is an Iranian-born Stanford math professor who became the first female scientist to win the prestigious Fields Medal in 2014. The award was earned by her work with the geometry of surfaces that can predict and explain tectonic plate movement.

Katherine Johnson was an American mathematician. Her careful calculations of orbital mechanics as a NASA employee were critical to the success of the first and subsequent U.S. crewed spaceflights.

24. “If you're beautiful, you're led to believe that you can't also be smart. But you can be fun and fit and social and be really smart. And the smarter you are, the more capable you'll be to handle whatever challenges come up in life.“ — Danica McKellar, Actress, Mathematics Writer and Education Advocate

Danica McKellar isn't just an actress, she's a successful mathematician. During her senior year at the University of California, Los Angles, she proved a mathematical theorem to predict the temperature at which an iron bar magnet can be longer magnetized. The theorem was named the Chayes-McKellar-Winn Theorem.

25. "Nothing in life is to be feared. It is only to be understood. Now is the time to understand more, so that we may fear less." — Mare Curie

One fun fact about Marie Curie is that her notebooks are stored in lead-lined boxes in France because they were contaminated with radium that they are radioactive and will continue to be so for many years. She literally took her work with her to the grave, her remains are even defined to be radioactive.

RELATED: 8 Female Entrepreneurs Making The World A Better, Safer Place For All Women

Emily Blackwood is a freelance writer who covers pop culture, true crime, dating, relationships, and everything in between.