Veterans Day is a day to honor veterans and their sacrifices on the anniversary of the end of World War I.

Instead of simply saying “thank you for your service” in your Instagram captions and other social media posts, consider using a Veterans Day quote that exemplifies the service and sacrifice of the many heroes who served in the U.S. military.

As you read over these Veterans Day quotes, reflect on the cost of war and remember the men and women who have stepped up to pay it time and again.

Here are 25 Veterans Day quotes to honor those who served.

RELATED: What I Learned From World War II Love Letters Between A Soldier & His Girl

2. "To care for him who shall have borne the battle and for his widow, and his orphan." —Abraham Lincoln

3. “On this Veterans Day, let us remember the service of our veterans, and let us renew our national promise to fulfill our sacred obligations to our veterans and their families who have sacrificed so much so that we can live free.” —Dan Lipinski

4. “As we express our gratitude, we must never forget that the highest appreciation is not to utter words, but to live by them.” —John F. Kennedy

5.“It is foolish and wrong to mourn the men who died. Rather, we should thank God that such men lived.” —George S. Patton Jr.

6. “It’s about how we treat our veterans every single day of the year. It’s about making sure they have the care they need and the benefits that they’ve earned when they come home. It’s about serving all of you as well as you’ve served the United States of America.” —Barack Obama 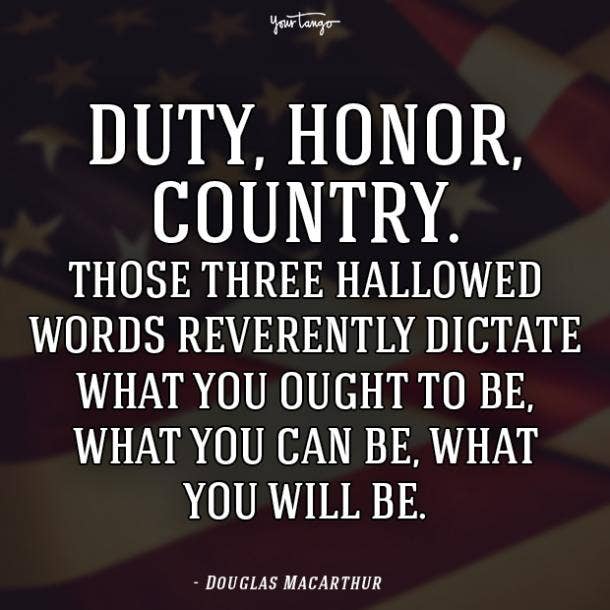 7. “Duty, Honor, Country. Those three hallowed words reverently dictate what you ought to be, what you can be, what you will be.” —Douglas MacArthur

8. “This nation will remain the land of the free only so long as it is the home of the brave.” —Elmer Davis

9. “Never was so much owed by so many to so few.” —Winston Churchill

10. “How important it is for us to recognize and celebrate our heroes and she-roes!” —Maya Angelou

11. “Our debt to the heroic men and valiant women in the service of our country can never be repaid. They have earned our undying gratitude.” —Harry S. Truman

RELATED: How Veterans Discharged Under ‘Don’t Ask, Don’t Tell’ Are Finally Getting Justice For Anti-LGBTQ Discrimination

13. “I have long believed that sacrifice is the pinnacle of patriotism.” —Bob Riley

14. “The patriot’s blood is the seed of freedom’s tree.” —Thomas Campbell

15. “Here men endured that a nation might live.” —Herbert Hoover

16. “A hero is someone who has given his or her life to something bigger than oneself.” —Joseph Campbell

17. “Their remembrance be as lasting as the land they honored.” —Daniel Webster 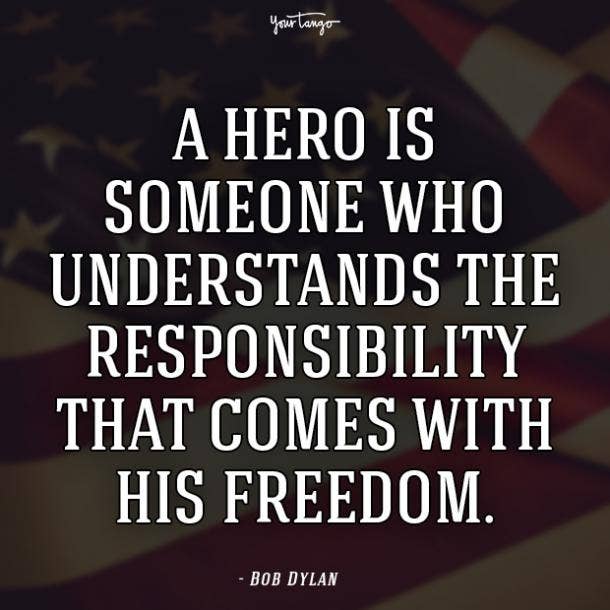 18. “A hero is someone who understands the responsibility that comes with his freedom.” —Bob Dylan

19. "Valor is stability, not of legs and arms, but of courage and the soul." —Michel de Montaigne

20. "Courage is contagious. When a brave man takes a stand, the spines of others are often stiffened." —Billy Graham

21. “Honoring the sacrifices many have made for our country in the name of freedom and democracy is the very foundation of Veterans Day.” — Charles B. Rangel

22. "The willingness with which our young people are likely to serve in any war, no matter how justified, shall be directly proportional to how they perceive the veterans of earlier wars were treated and appreciated by their nation." —George Washington 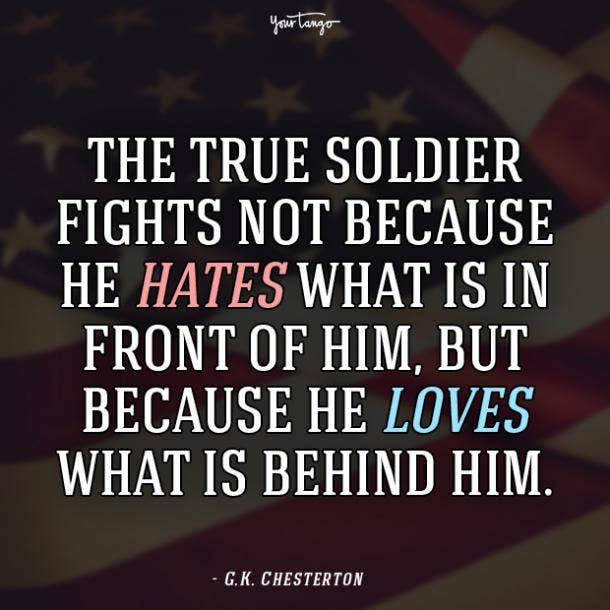 23. “The true soldier fights not because he hates what is in front of him, but because he loves what is behind him.” —G.K. Chesterton

24. "In war, there are no unwounded soldiers." —José Narosky

25. "Without heroes, we are all plain people, and don't know how far we can go." —Bernard Malamud