Though the first film was released 21 years ago, there are some "The Matrix" quotes that are eerily relevant today.

"The Matrix," released in 1999, is a science fiction action film that depicts a dystopian future where humanity is trapped inside a program called The Matrix, which is a simulation of reality created by machines made to distract humans while their bodies are used as an energy source.

Though "The Matrix" is fictional, people have begun using the term “glitch in the matrix” to describe things that are actually happening but seem far too strange to be real, making people wonder if we really are living in a simulation.

The success of the original "Matrix" film has since brought us three sequels: "Reloaded," "Revolutions," and the most recent "Resurrections," all of which explore different themes related to the threat of technological control.

As technology advances rapidly every day, these quotes from "The Matrix" sometimes do make life feel like a simulation.

17 Eerily Relevant "The Matrix" Quotes to Open Up Your Mind

1. "Ever have that feeling where you’re not sure if you’re awake or dreaming?" — Neo, "The Matrix" 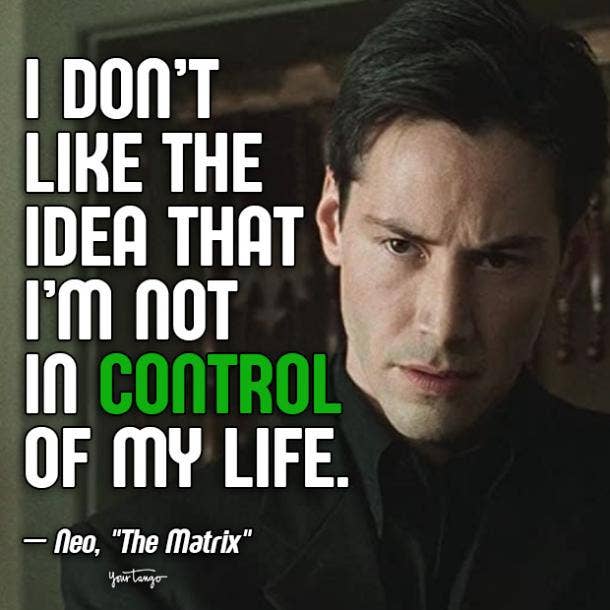 3. "Denial is the most predictable of all human responses." — The Architect, "The Matrix Reloaded"

4. "The only way you can survive is to spread to another area. There is another organism on this planet that follows the same pattern. Do you know what it is? A virus. Human beings are a disease. A cancer of this planet." — Agent Smith, "The Matrix"

5. "What do all men with power want? More power." — The Oracle, "The Matrix Reloaded"

6. "You have a problem with authority, Mr. Anderson. You believe you are special, that somehow the rules do not apply to you. Obviously, you are mistaken." — Rhineheart, "The Matrix"

7. "Have you ever had a dream, Neo, that you were so sure was real? What if you were unable to wake from that dream? How would you know the difference between the dream world and the real world?" — Morpheus, "The Matrix" 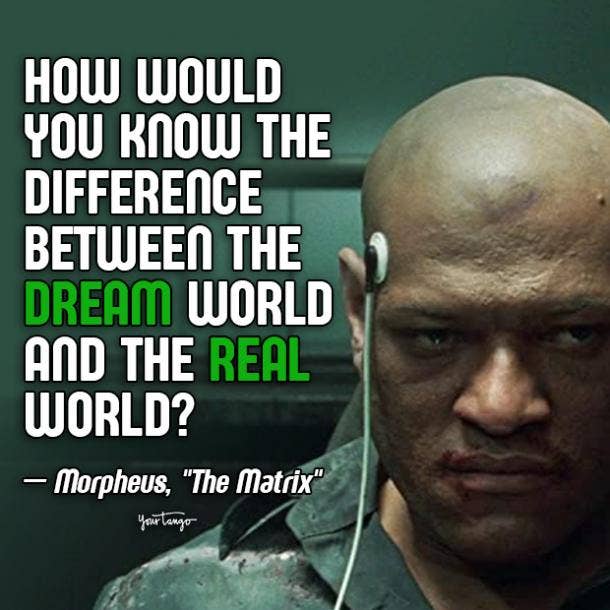 9. "What you know you can't explain, but you feel it. You've felt it your entire life, that there's something wrong with the world. You don't know what it is, but it's there, like a splinter in your mind, driving you mad." — Morpheus, "The Matrix"

10. "I hate this place, this zoo, this prison, this reality, whatever you want to call it. I can't stand it any longer. It's the smell, if there is such a thing. I feel saturated by it. I can taste your stink, and every time I do I fear that I have somehow been infected by it. It's repulsive! Isn't it?" — Agent Smith, "The Matrix"

11. "Every mammal on this planet instinctively develops a natural equilibrium with the surrounding environment; but you humans do not. Instead, you multiply and multiply until every resource is consumed." — Agent Smith, "The Matrix"

12. "This is your last chance. After this, there is no turning back. You take the blue pill: the story ends, you wake up in your bed and believe whatever you want to believe. You take the red pill: you stay in Wonderland and I show you how deep the rabbit-hole goes." — Morpheus, "The Matrix"

13. "Throughout human history, we have been dependent on machines to survive. Fate, it seems, is not without a sense of irony." — Morpheus, "The Matrix"

15. "I’ll show these people what you don’t want them to see. A world without rules and controls, without borders or boundaries. A world where anything is possible." — Neo, "The Matrix"

16. "If real is what you can feel, smell, taste and see, then 'real' is simply electrical signals interpreted by your brain." — Morpheus, "The Matrix"

17. "There's a difference between knowing the path and walking the path." — Morpheus, "The Matrix"

RELATED: 8 Good End Of The World Movies To Watch

Isabell Tenorio is a writer who covers astrology, pop culture, love, and relationships.