Even those who aren’t huge Ye fans know how much of an impact Kanye West’s mom, Donda West, had on the rapper, his music, and his life in general.

Kanye frequently references his mother — who was a professor and chair of Chicago State University's Department of English, Communications, Media and Theater — in his lyrics, and even named his most recent album, “DONDA,” after her.

However, nothing showcases Kanye’s close relationship with his mom quite like the Netflix docuseries “jeen-yus: A Kanye Trilogy.”

The series uses footage recorded by the people closest to Kanye as he made his up the music industry ladder.

What viewers are really taking away from the series, however, is how incredible of a person and mother Donda was. It’s abundantly clear just how much she believed in and loved her son, and how much she meant to him as well.

RELATED: What To Expect From Kanye West's 'Donda 2' — From Collabs To Lyrics About Kim Kardashian & Pete Davidson

Unfortunately, Donda West passed away in 2007 after suffering a heart attack following complications from cosmetic surgery.

Not only are some of her most inspiring words captured on film in "jeen-yuhs," but they can also be found in Donda's memoir, "Raising Kanye: Life Lessons from the Mother of a Hip-Hop Superstar," originally published in 2007 and reissued in 2009.

These Donda West quotes are a touching reminder of how integral Donda was — and still is — in Kanye’s life, and how powerful the impact of a mother's love can be not only on her children, but on everyone their child's life touches.

1. "When Kanye was very young... I began teaching him to love himself by putting images that looked like him around him. It’s something I felt I must consciously do. The low self-esteem he was bound to take on if he looked to the media for validation would only serve to cripple him and make him question himself into oblivion.” — Donda West

2. “Anybody that does something that much and that long and is that good… it’s gotta pay off. You can’t go over there and do nothing but blow up. The main thing is, you gotta do something that you really love to do.” — Donda West

3. "There weren't many things that I denied Kanye. But there was one thing that I could not compromise on — his safety.” — Donda West

4. “The giant looks in the mirror and sees nothing.” — Donda West

5. “A lot of people like to coddle their children. They don't want to hurt their feelings, or make them feel bad for not achieving. But if you don't set benchmarks, and if you don't set that bar high, you can't expect your children to excel.” — Donda West

6. “I made sure that Kanye always knew he was loved — not just doted on and indulged, but loved.” — Donda West 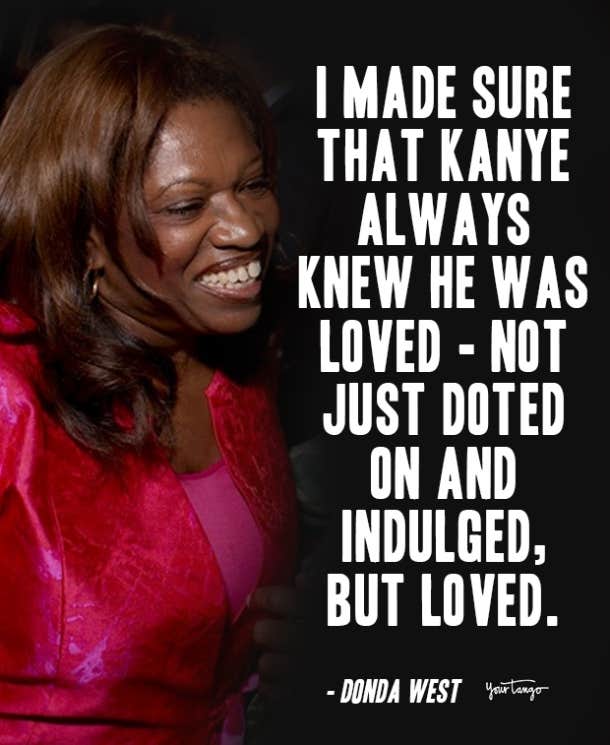 7. “We live in a society where everyone wants to put on a good face, wants to look good no matter what. But the truth sometimes is very ugly and you have to stand strong in those times when the ugly truth has to be told — when you have to come face-to-face with your own ugliness or the ugliness of those who might persecute you for telling the truth.” — Donda West 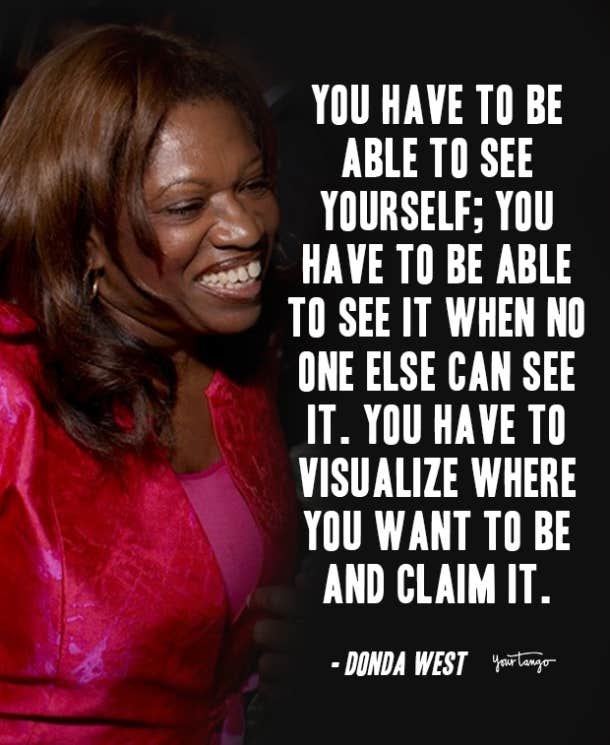 12. “The man I ended up writing about is the man who, to date, has had perhaps the most profound impact on my life: my son. And what makes this project extra special to me is that I get to share what he has meant not only to me but also to music and to a generation.” — Donda West

14. "What Kanye is is passionate — passionate about everything he cares about. And it is that passion that has brought fame, fortune, better, and best. Admittedly, his passion can lead to what some may see as trouble. But that passion is his lifeblood. Therefore, I encourage it, applaud it, and learn from it. Whatever mistakes he makes, I am certain that he learns from them. And learning from mistakes means growth.” — Donda West

15. “I don't sit around supporting Kanye because I think he is always correct. I support him because he is my son, doing positive things in the world.” — Donda West

16. “While it's prudent and appropriate to be silent sometimes — some things are indeed better left unsaid — being honest and open about how you feel is not all bad.” — Donda West

17. “I can believe it, the way you are... you play tracks like Michael Jordan shoots free throws." — Donda West